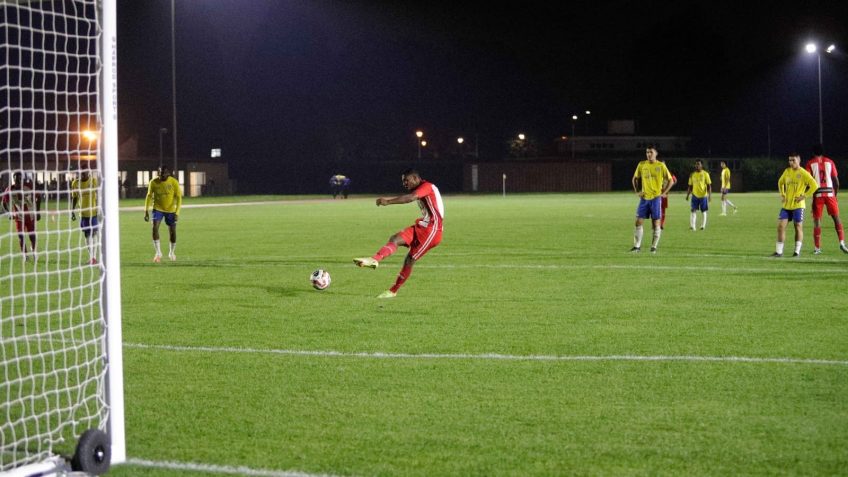 The weekend started off on Friday over at Ashtons where hosts Woodford Town took the lead against Clapton, with Chaynie Burgin firing home a penalty on 16 minutes. But Clapton went on to win the game, as they were awarded three penalties of their own; each one taken and converted by Jaden Owusu-Napual. Mohammed Raza scored the other Clapton goal, which now sees the Tons move up to 15th, having now gone three games unbeaten. Woodford Town end the weekend in 13th place.

Stanway Rovers lead the table but dropped points – allowing the chasing pack to make ground. Of course Walthamstow’s 3-0 away win at Stanway did themselves a big favour, with Harrison Carnegie, Charlie Cole and Yemi Adelani supplying the goals that see Stow in 4th, four points behind Stanway but with 5 games in hand.  Redbridge followed their 4-0 midweek win over Sporting Bengal United with a 3-2 away win at St Margaretsbury. Lawrence Ajong had fired St Margaretsbury into a first half lead, but Ibrahim Kehinde equalised, before then handing the Motormen the lead when he scored a penalty in the 71st minute. The hosts levelled up themselves via a penalty seven minutes later as Ajong notched his second of the game. But Anthony Martin, making his Redbridge debut, then provided the winner three minutes from time. Redbridge end the weekend 2nd on goal difference. Athletic Newham are on a run of five league games unbeaten after they beat fellow high flyers Cockfosters 4-1. The visitors took an 8th minute lead through Ryan Wade, but seven minutes later Jaildson Seidi equalised. Jacques Leurs then fired Newham into the lead when he scored his first goal of the game on 21 minutes, and nine minutes later completed his hat-trick, placing Athletic Newham into a 4-1 half-time lead, which as it turned out was also the final score and moves Athletic Newham up to 3rd. Saffron Walden Town are 5th after winning 5-0 at Hoddesdon Town who gifted the Bloods their first goal two minutes into the second half. That seemed to add a bit of impetus to the Saffron Walden side as they went on to score four times before the game was out; Gavin Cockman, Craig Claver, Charlie Smith and Scott Piggott each scoring a goal in the away victory. Stansted have to be content with a point from their 1-1 draw with local rivals Takeley. The Airportmen took a 5th minute lead through Jack Mitchell but Glen O’Hanlon equalised in the 72nd minute. A point each was also the outcome from the Little Oakley v Ilford encounter which ended goalless. Sawbridgeworth Town remain bottom after a 4-1 reverse at West Essex, however the Robins were leading 1-0 at half time thanks to an Eric Koduah goal in the 37th minute. But Symeon Taylor equalised in the 54th minute, and two minutes later Oliseh Okuguni handed West Essex the lead. On 65 minutes West Essex extended their lead when Okuguni notched for the second time, before Mohamud Kaudeer closed the show with a goal five minutes from time that lifts West Essex up to 9th. Southend Manor remain 19th after a 2-1 home defeat at the hands of FC Clacton who end the day in 7th position in the table. Jamal Allen and Kieran Wales scoring in the first half for the visitors, with Manor pulling one back when Jordan Chambers hit the target on 53 minutes. White Ensign beat Enfield 1-0 with Andy George the scorer on 33 minutes.