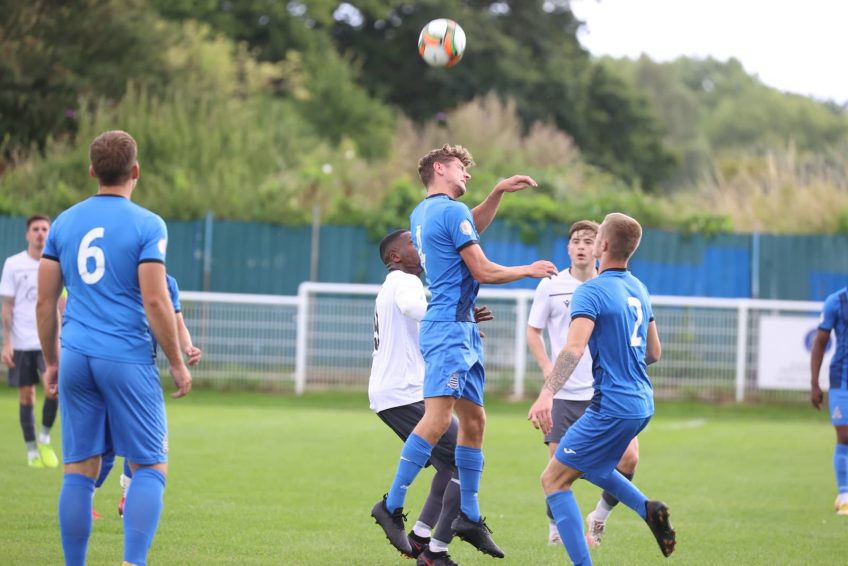 Little Oakley put in a brave performance against Chelmsford City. The Vanarama National League South started the game with a slew of chances but it was the Acorns that opened the scoring, until the Assistant Referee raised his flag. The goal may not have counted, but it showed the Clarets that Little Oakley had turned up looking to cause an upset. At the back, the Acorns had to weather storms as Wraight and Harrison had shots blocked, then in the 27th minute had a shot themselves, with a Rodger turned behind by Marsden. The Oakley defence was beaten in the 30th minute though; a corner boounced around the Oakley box before Charlie Sheringham got a final touch to put it past the goal-line. Two minutes later Oakley were clearing a ball off their own goal-line. However Oakley mustered two chances in the final minutes of the first half, as Rowe had a shot saved by Marsden, then a corner in stoppage time was headed wide. Joyce was kept busy in the Oakley goal, having to save an effort from Sheringham, then defend a string of corners, before coming off his line to halt a Jackson run after a good lay off from Dunne. And then in the 57th minutere Joyce made another good save to keep out a Jackson shot. But Chelmsford kept knocking at the door, and it finally opened for them in the 75th minute when a Dave Winfield header glided into the net. Little Oakley were not quite killed off though because Luke Mayhew pulled one back in the 86th minute, then almost found an equaliser in stoppage time. His shot went wide, much to the relief of the Chelmsford fans as had it gone in they would have been facing a replay in midweek. As it was they progress, having had to work for the victory against a Little Oakley side who will remember their 2021/22 FA Cup campaign for years to come as it is, to date, their best ever FA Cup campaign. Walthamstow will also now be turning their attention to League business after their Cup run ended at the hands of Hornchurch. The FA Trophy holders were handed an 11th minute lead by Sam Higgins, and Jili Buyabu then doubled the lead for the Urchins on 33 minutes. Stow needed to find an early goal going into the second half, and there was indeed a goal in the 54th minute, scored by Liam Nash to give Hornchurch a 3-0 lead. Stow found the net themselves in the 83rd minute when Adebola Sotoyinbo converted a penalty. However that was to be Walthamstow’s only goal of the afternoon. Hornchurch meanwhile wrapped things up with another goal in the 90th minute when Charlie Ruff slotted home from close range.

FC Clacton took all the spoils on Friday evening as hosts Redbridge were beaten 3-1. The visitors were leading 2-0 within twenty minutes through Teddy Collis and Lee Clowsley. Mekhi McKenzie added a third in the 83rd minute, with the hosts notching a consolation via an Ibrahim Kehinde penalty four minutes later. Redbridge now drop to 3rd. Meanwhile just up the road at Ashtons, hosts Woodford Town were extending their winning run to four after they beat Sawbridgeworth Town 2-0. Chaynie Burgin and Peter Clarke scored the goals that see the Woods now occupying 12th place, while the Robins remain bottom.

Athletic Newham were gifted an own goal in the 10th minute against Saffron Walden Town on Saturday. Scott Piggott made good that blip with a 25th minute equaliser, but the hosts were back in front three minutes later when Ricard Kone struck, and he did so again fifteen minutes from time to secure the 3-1 victory that now sees them 6th in the table, with Saffon Walden ended the day in 4th. Its been a good week for Stanway Rovers, who now top the table; having won 2-0 away at St Margaretsbury on Tuesday,they then went on to win by the same scoreline at Ilford yesterday. Jordan Barnett (30) and Ernest Okoh (54) supplied the goals to make it three wins in a row, to go along with the three clean sheets that Luke Skinner has kept in those three games. White Ensign have also picked up two wins this week, with plenty of goals being scored in the process. Sporting Bengal United were brushed aside with a 7-0 win on Tuesday, and that followed that up by inflicting a 4-1 defeat to Hoddesdon Town. An Oliver Bell brace, alongside goals from Jason Reynolds Blanche and Connor Barnby saw them through and up to 11th. Larry Asare was the Hoddesdon scorer, who sit down in 17th. Sporting Bengal United very nearly got a point at St Margaretsbury, having taken the lead in the 6th minute through Oshun Lewis. Casey Nolan-Samuels equalised just past the half hour mark, but the hosts that captured all the points when Kyle Roberts scored a goal deep in second half stoppage time. The result sees St Margareetsbury now sitting 14th, while Sporting Bengal are 20th. Stansted, just like Hoddesdon, finally played their first home league game of the season after a spate of away games due to groundsharing with cricket. And whilst Hoddesdon lost, Stansted at least got a point as their game against Enfield ended goalless. The Airportmen are now 2nd, while the E’s are 10th. West Essex meanwhile put in a very good performance at Southend Manor which saw them come away with a 3-0 away victory: David Bell, Jon Ogunsanya and Symeon Taylor scoring a goal apiece to secure the points.