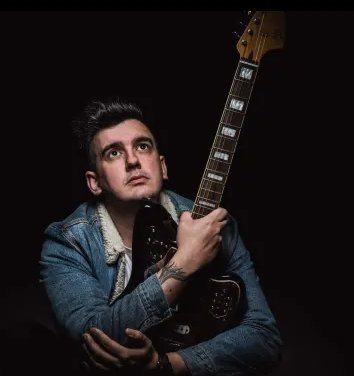 We’ve been playing the new track from Alexander White, Revolutsiya Na Parogie, here on Phoenix FM – and we chatted to Alexander to find out more about him.

I’ve been passionate about music for as long as I can remember. Though it became an obsession when I picked up a guitar when I was 13. After learning a few chords I continued to listen to all the greats and from that built from a foundation that would enable my ability as it is today….I was always into 80’s new wave and pop. Bit of electro here and there and largely old school cheesy ‘hair’ rock. Think Iron Maiden and Def Leppard…. I’m sure it’s in there somewhere actually if you listen closely….

If you haven’t heard my music before I’d describe it as ‘unapolgetic satire electro pop’…I’m quite a politically active person but I’m no fan of the counter cultural scene that excludes itself from society by exploring hardcore niches that most people feel disconnected from. I like to explore contemporary political themes from a ‘fun’ angle so to speak. Love, relationships and all the usual shite is in there too.

My favourite artists at the moment are ‘the paper kites’ and I’ve been banging out a bit of ‘roxy music’ too… Japanese house are another band of note that I think are exceptional….oh yeah, ‘kino’. Classic Soviet band. In fact, they were a huge influence on ‘revolutsiya na parogie’…

Would love to collaborate with Jenny Lewis. LA singer songwriter. She was a childhood film star from the 80’s and 90’s…. absolutely love her voice and think her songs are pretty amazing. As long as she stays away from this hip hop thing she seems to be into. Her music has a Ryan Adams/Fleetwood Mac vibe going on that I’m really down with.

I’m not sure what plans for the future are. I don’t really like or get on with musicians that much. I tend to stay away from them as much as possible. So I’ll probably continue to pursue this as a solo artist. At least until I can get a band that wants to work with me and deal with the fact that I probably don’t like them. Then I’ll get touring if possible. It’s hard to say.

Where can we find out more about you and your music?