We’ve been playing Laidback Air by ZPEXTRE quite a lot on the station over recent days and weeks – but who is? We spoke to him to find out …

I love pop songs, but I am magnetized to truth and honesty, good and bad. So I would say Fun Spirited Psych with Subtle Social Commentary.

Does your commitment to truth and honesty manifest itself in your writing?

As a child, I was able to dream and imagine my future. Innocence allowed me to wander through the development of my mind to be who I am today. In March 2020 I wrote Save It For The Kids! as Trump continued to sell out the country for his political and financial gain.

It takes a lifetime to build a home, but a single day to tear it down! More criminal than all the countless institutions that he destroyed, is his blatant disregard for the social contracts that we have in place. In this case, the innocence of children is something that we all subconsciously agree upon. That is, until Trump. 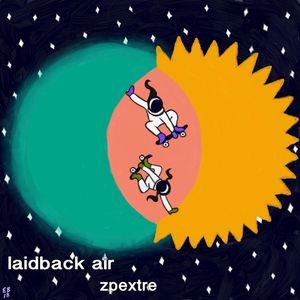 I’ve released a few tracks on streaming services over the last three years – Souvenir, Electrify, Laidback Air, Save It For The Kids! and Hypnotized.

What’s your philosophy on making music?

There are many things in this existence that we do not fully understand. For example, we spent almost half of our lives sleeping. I appreciate all the discoveries that have been made up to this point, but I look in anticipation for the discoveries to come in the next 100 years.

Music is similar in this regard.

What I know of music is: It is predominantly an art form of math, but the future will reveal that it is science too. It is a reflection of ourselves. It is found in all cultures and it affects our mind, body and soul. It is a vibration and can behave like any other waveform traveling through matter. Music unites and communicates.

So, music’s role in society is to allow us space to enjoy our lives and to not dwell on the bad things. It is understandable that humans have a tendency to remember the bad things that have occurred to us. It is a survival mechanism. But those memories should not dictate our existence. Moreover, I believe that music can heal the mind, but that’s for another day.

I’m not sure. I’m kinda just going with the flow. I’ll know what to do when the time comes.

I have an official website at zpextre.com and also a linktree with all of my current interview and social links at linktr.ee/zpextre.