The wildest conspiracy story ever??


Yesterday we looked at the case of the mass disappearance of hoards of racing pigeons and today we investigate another story involving birds. 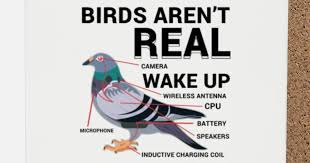 Either this could offer an explanation for our story yesterday, but more likely it will rank as one of the wildest conspiracy stories ever.

Naturally it’s started in the US. Where else?

“Birds Aren’t Real” is a ‘meta conspiracy movement’ that claims those flying creatures we see every day aren’t actually birds and are instead surveillance devices planted by the government!

Leader of the group which really got off the ground (if you’ll pardon the expression) in 2017, Peter McIndoe, says the movement has actually been going since the 1970’s and claims that the US government has been engaging in a multi-Administration and generational campaign to rid the country of all birds.

Followers claim that between 1959 and 2001, the US government poisoned roughly 12 billion birds with a secret virus and the creatures have carefully been replaced with covert spy technology. The initial aim was to stop all the bird poo from being dropped every year, and then the CIA realised they could use the concept of birds to their advantage.

Vultures are primarily used for public sanitation, while hummingbirds are assassination drones.

So now the people behind BIRDS AREN’T REAL want to raise awareness for their cause and have embarked on a US tour to get the word out. 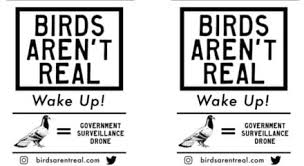 The launch event took place in Springfield last weekend and there were loads of people who turned out to show just how much they believe (real or not) that birds are nothing but listening and tracking devices.

The group has released a statement, saying: “Our movement is quickly approaching a critical juncture. As we grow stronger in number, more and more highly classified information is being relayed to us by whistleblowers across the nation. Expect massive leaks soon.”

Apparently anyone who thinks this is a hoax is encouraged to find a bird and establish dominance by looking ‘the bird straight in the eyes and declare the following statement confidently “I know your secret. I know that you are a surveillance drone in disguise.”

Best get cracking then!

Meanwhile I was joined later in the programme by Margaret Mills who took us back to the 1930’s and Frinton-on-Sea, where many stars of the day used to holiday there and when there were real birds aplenty in the skies along the Essex coast.

You can listen again here to what Margaret had to say on this subject:-

I’ll see you again in a couple of weeks as I’m off next week.

All the best,
Scott