Making a meal out of political correctness


Now I ask you is this the height of political correctness gone mad? 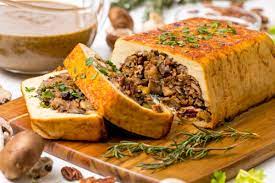 A chef who posted a recipe on a vegan website for a TOFURKEY DINNER, where turkey has been replaced by tofu, was doubtless pleased to receive a text from someone who’d made the dish and been thrilled by the results.

The person concerned then enquired how long the chef had been a vegan, but after the chef admitted that he was neither a vegan nor even vegetarian, but just wasn’t keen on most meats, things went rapidly downhill.

He was than told in no uncertain terms that tofu is strictly for vegetarians and that the chef had been ‘appropriating us and stealing for his own selfish need’.

The response continued, ”Oh. So you’re like pretending to be a vegan because it’s cool and in? I’ve been vegan for three years now and it was the best decision I’ve made in my life. It’s not hip or cool, it’s important.”

“Tofu is strictly for vegetarians so I’m going to ask admin to have you immediately removed from our group.”

Going back to the days when such issues of political correctness were unknown, Margaret Mills took us back to 1909 and the earliest days of aviation when there were a number of places in Essex like South Fambridge which were used by early aviators like Noel Pemberton Billing.

Listen here to what Margaret had to say on this subject: –