Reason to panic – baby has a hole in his head!


An Essex mother rushed her 10-month old son to hospital after spotting what she thought was a hole in the roof of his mouth.

Mercifully her concern turned out to be a false alarm but when you’re a parent it’s very easy to push the panic button if something doesn’t look right!

24-year old Becky Stiles had been changing baby Harvey’s nappy when she spotted the problem and started to panic.

“I tried to touch it but he started to scream at me so I made his dad take a look’.

The couple used a torch to try and get a better look but then decided to go straight to A&E where staff decided to call a specialist but after a quick check, the hole was found to be a sticker that Harvey had somehow licked and got stuck to the roof of his mouth. 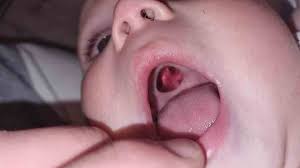 So all’s well that ends well then!

Being a Tuesday I welcomed back Margaret Mills into the studio, and this week Margaret was looking at some piratical activity which took place in March 1803 close to the Bradwell Marshes.

If you missed what Margaret said, you can listen again here:-

Well I’m off now but hope to see you again next week,
Scott