I was joined today by Margaret Mills for her book review, but first off we heard about the drunk woman who tried to place an order for a burger and fries with a police officer there to arrest her for drink driving!

Yes, 33 year old Lance Corporal Kayleigh Goodall was so sozzled that she mistook the officer for one of the restaurant’s staff and ordered a midnight snack.

Initially picked up by CCTV operators at Catterick Garrison, North Yorkshire, “driving erratically all over the road” on the base, Lance Corporal Goodall then pulled into the McDonald’s Drive Through, located just half a mile off the base, but failed to notice that it was actually closed and cordoned off.

As she drove up to the order window a police car pulled up beside her and when the officer got out to speak to her, she then tried, unsuccessfully,  to place an order for food from the menu.

She was then asked to blow into a bag and was found to be more than three times over the legal limit.

Unsurprisingly she was banned for driving for 27 months, presented with a 12-month community order plus costs of £85 plus a £95 surcharge.

As a consequence her specialist driving and communication role in the army is now in serious jeopardy and she will also have to face a military disciplinary hearing.

Not so much fast food from a drive thru’ but more a heavy cost and possible marching orders then!

When Margaret Mills joined me, I have to say I was surprised by her choice of book. It was historical, which was no surprise, but rather than English history, the book involved German history and concerned a man who held high office for less than 3 months – Emperor Frederick III, who was in fact one of the last German emperors. 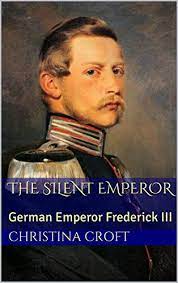 The chosen work this time was thus an autobiography written by Christina Croft, the full title being, “The Silent Emperor: German Emperor Frederick III”.

Margaret asserted that history has always been full of “what ifs?”, and suggested that this man’s life story could make you speculate about how the landscape of world history might have looked very different in our own times had his life not been so tragically cut short by throat cancer less than 3 months after his accession to the German throne.

Anyway listen here to what Margaret had to say about this book, which is available in Kindle and paperback: –

All being well I hope to see you again tomorrow,
Scott