On today’s music packed edition of the show, we first heard about a politician in Canada who clearly had nothing to hide.

I think we’ve all heard about THE NAKED CIVIL SERVANT – but a naked politician is something else. 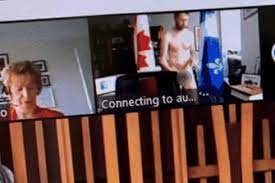 William Amos, who’s has represented the Quebec district of Pontiac since 2015 for the Liberal Party, appeared at a virtual meeting of the Canadian House of Commons between the national Canadian flag and the flag for Quebec  – totally starkers.

A screenshot of Mr Amos’s disrobed display, originally visible only to members of parliament,  was obtained by news agency The Canadian Press.

In an email statement apologising for his bare-faced cheek, Mr Amos described his state of undress as “an unfortunate error”.

“My video was accidentally turned on as I was changing into my work clothes after going for a jog”, he said.

“I sincerely apologise to my colleagues in the House of Commons for this unintentional distraction. Obviously, it was an honest mistake and it won’t happen again.”

Well he would say that, wouldn’t he?

Speaker of the Canadian House of Commons, Anthony Rota has reminded MPs to always be vigilant when they are near a camera and microphone.

Later in the show, we asked if you’d ever considered visiting a psychic medium or fortune teller?

Truth to tell, I have.

The woman I saw started out by telling me that my house was at a bend on a long road. Actually I live in a cul-de-sac so that was a blinding start. Wont be going back there then!

Well 26-year old care worker, Lauren Dent reportedly visited a group reading with a well known psychic medium but midway through the session the psychic, who had completed readings for for only half of those present announced that she was feeling too drained to carry on, and promptly left the session, announcing that she would return on another day.

As Lauren was set to be working on the newly appointed day, she asked if there was any possibility to swap days or alternatively receive a refund.

No reply was initially forthcoming but eventually after about a year the psychic responded and said that if Lauren sent her bank details she would be refunded the £10 deposit.

So that was good news, but in addition there was a cryptic note advising Lauren to make the most out of the next 3 years as its “the most important time you have left!”

Well here’s my prediction for today – I’ll be back same time tomorrow. Short of unforeseen accidents or incidents, I think that’s a reasonable prediction.