I was delighted to be joined today by a lady who has made the transition from being both a lawyer and investment banker, to author.

FREDDIE PETERS, a French national started her legal career at the Sorbonne in Paris, where she practiced for 5 years before becoming seduced by the world of investment banking in London.

Initially the transition proved challenging, as being both foreign and female, resulted in her being suborned to making the tea and handing out biscuits to her predominantly male counterparts. Eventually overcoming these issues, Freddie spent 25 years in the square mile, which in the early years was renowned for ethical dealing.

However as the financial crisis struck, Freddie became increasingly concerned by some of the more questionable behaviour she witnessed which caused her to wonder whether such methods might conflict with her own standards.

Clearly a further career change beckoned, and turning to writing, it’s no surprise that Freddie drew on her experiences gained in the City.

So far Freddie has penned 4 novels in the first series – “COLLAPSE”, “BREAKING POINT”, “NO TURNING BACK” and “SPY SHADOWS”.

All books may be purchased from Freddie’s website https://freddieppeters.com/ from where you can get full details of each book and if you wish, join Freddie’s Book Club which provides exclusive content, additional insight into the books, their characters and how the books were conceived.

You can even read the first chapters of new books.

Meantime listen here to what Freddie had to say to me today: –

In the second hour of today’s programme we heard about how some of those on the run from the law, have through their own misjudgements, literally fallen into the arms of the police.

Over in Missouri, police using sniffer dogs to uncover a man suspected of having a supply of a controlled substance, raided a house in which they rightly believed him to be holed up.

He was in fact hiding in a cupboard but gave himself away after he inadvertently broke wind so loudly, that sniffer dogs being employed in the hunt, effectively became redundant. 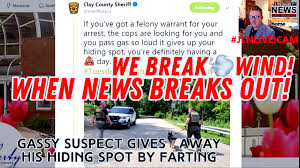 Indeed it was suggested that the sniffer dog closest to the blast, should be granted an award for the hazard to which he had been subjected!

Meanwhile up in Rochdale near Manchester, police raided a house at which a party was in full swing declaring that they were on the look out for one of the alleged party goers who promptly made himself scarce.

Whilst officers were in the midst of interviewing other guests present, there was a sudden loud cracking sound from above as the sought for miscreant apparently stepped on a weak spot in the loft where he had unsuccessfully tried to conceal himself. 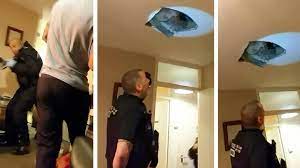 Moments later a foot appeared through a hole in the ceiling before the wanted man literally fell into the waiting arms of the law!

Let that be a lesson to him.