Written by Paul Golder in In The Papers👁 160 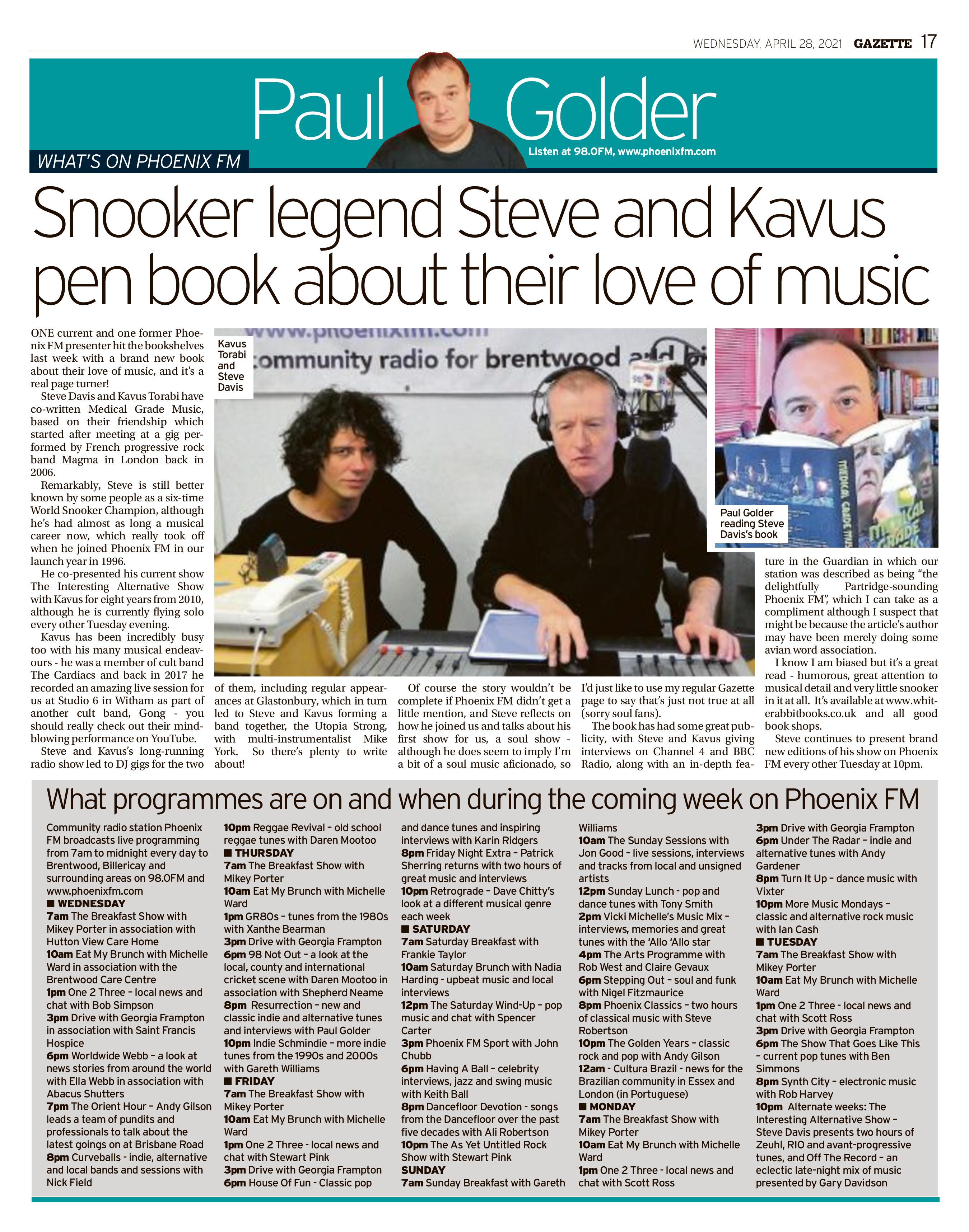 One current and one former Phoenix FM presenter hit the bookshelves last week with a brand new book about their love of music, and it’s a real page turner!

Steve Davis and Kavus Torabi have co-written Medical Grade Music, based on their friendship which started after meeting at a gig performed by French progressive rock band Magma in London back in 2006.

Remarkably, Steve is still better known by some people as a six-time World Snooker Champion, although he’s had almost as long a musical career now, which really took off when he joined Phoenix FM in our launch year in 1996. He co-presented his current show The Interesting Alternative Show with Kavus for 8 years from 2010, although he is currently flying solo every other Tuesday evening.

Kavus has been incredibly busy too with his many musical endeavours – he was a member of cult band The Cardiacs and back in 2017 he recorded an amazing live session for us at Studio 6 in Witham as part of another cult band, Gong – you should really check out their mind-blowing performance on YouTube.

Steve and Kavus’s long running radio show led to DJ gigs for the two of them, including regular appearances at Glastonbury, which in turn led to Steve and Kavus forming a band together, the Utopia Strong, with multi-instrumentalist Mike York. So there’s plenty to write about!

Of course the story wouldn’t be complete if Phoenix FM didn’t get a little mention, and Steve reflects on how he joined us and talks about his first show for us, a soul show – although he does seem to imply I’m a bit of a soul music aficionado, so I’d just like to use my regular Gazette page to say that’s just not true at all (sorry soul fans).

The book has had some great publicity, with Steve and Kavus giving interviews on Channel 4 and BBC Radio, along with an in-depth feature in the Guardian in which our station was described as being “the delightfully Partridge-sounding Phoenix FM”, which I can take as a compliment although I suspect that might be because the article’s author may have been merely doing some avian word association.

I know I am biased but it’s a great read – humorous, great attention to musical detail and very little snooker in it at all. It’s available at www.whiterabbitbooks.co.uk and all good bookshops; Steve continues to present brand new editions of his show on Phoenix FM every other Tuesday at 10pm.