On today’s programme we heard about the burglar identified as the culprit almost 10 years after committing the crime – and all because he’d taken a bite out of of a sausage! 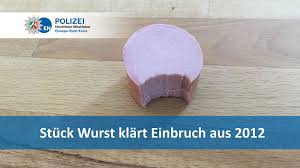 Back in March 2012, police were called to investigate a break-in at a house in the town of Gevelsberg, in the German state of North Rhine-Westphalia.

Unsurprisingly the burglar had long since beaten a hasty retreat but it seems that before doing so, he must have felt a mite peckish and so sampled a Knockwurst sausage, which presumably not being to his taste, was duly left with a bite taken out of it.

As a result German police have re-opened the file on the old burglary case and started extradition proceedings.

This must be a “Wurst” case scenario for the man involved, who now knows to avoid any snacks lying around at the scene of the crime lest they come back to bite you years later!

Of course being a Tuesday I was joined once again by Margaret Mills who’s subject today concerned Hawkspur Camp which had been established in Great Bardfield specifically for young men evacuated from London during the war.

Listen here to what Margaret had to say about this establishment: –