Goats waiting for the end of lockdown 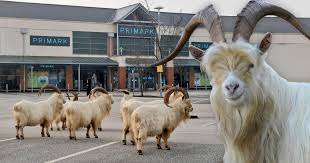 At least 15 Kashmir Mountain goats have been spotted queuing outside Primark in Llandudno presumably in search of some retail therapy.

Unfortunately for them the Government’s closure of non-essential shops during lockdown means they will have to wait several weeks before they reopen.

Maybe its for this reason that they were later spotted apparently trying to check into a hotel. 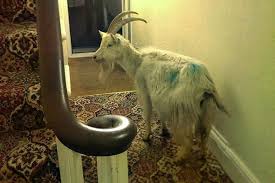 Officially the goats live on the Great Orme headland by the Welsh seaside town but since the lockdown took effect, have gained notoriety for invading the traffic free streets, climbing walls, eating plants and hedges, and generally causing havoc.

In the second hour I was joined by Margaret Mills to report on a news story which made the headlines in the local press back in 1910.

Clearly for this story to have made it to the front page and for the not inconsiderable attention given it by the emergency services, it must have been a very quiet day for both incidents and for news.

If you don’t understand what I’m saying, or missed what Margaret said, listen here and see what I mean:-