The panel and guests discuss the Team’s performance on Saturday against Tranmere Rovers; the subsequent departure of Ross Embleton and appointment of Jobi McAnuff as Interim Manager; the Team’s performance on Tuesday night against Grimsby Town; as well as giving their views of that they see happening around and about E10; and whether we have a realistic chance of getting in the play-offs. 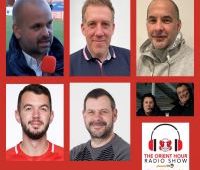