In tonight’s Orient Hour Andy Gilson is joined in the studio by Darin Burrows and Steve Tongue where they review an interview that Steve Tongue and Barry Galvin conducted with O’s boss Ross Embleton during the week.

The panel also discuss the forthcoming fixture home to Port Vale along with responding to any questions and comments submitted via the usual forums.

Don’t forget, the next fixture is INCLUDED in your Season Card streaming pass. However, if you are not a Season Card holder and wish to subscribe to any of the forthcoming matches on the #OrientLive streaming service – Click Here to see the streaming passes on offer.

Finally, get your tissues ready as at the end of the show we remember all the members of the Orient Family that we have lost since the start of the year. 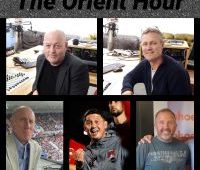