Here we are at the start of another week of lockdown and today we started with a look at a Covid related story. 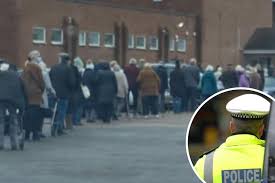 It seems that following a “tip off” of a RAVE taking place, police raided the Essex Freemason’s Saxon Hall in Southend but instead of the anticipated crowd of wild party goers, they found a group of grumpy old men and women in their 80’s and 90’s pushing wheelchairs, armed with zimmer frames and walking sticks, queuing for their Covid jabs which had failed to be delivered.

Eventually some vaccines turned up, but with fewer doses than expected chaos ensued.

Saxon Hall manager, Dennis Baum said congestion got worse after they ran out of vaccine with an hour’s delay in getting more. It was absolute chaos and very cold. The car park became choc-a-bloc with 80 year-old-plus drivers, so we were grateful for the police sorting out the traffic management even if they were disappointed not to be swamped by teenage swingers.

It was no surprise that police had acted quickly as an unlicensed rave in Margaretting last year attracted 400 revellers!

In the second hour of today’s programme I was joined by Margaret Mills for her book review – “Looking to Heaven: Stanley Spencer Volume 1” by John Spencer. 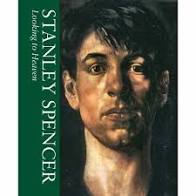 Now if I’m totally honest when first learning of her choice for this month, I was almost overcome with excitement, partly because if I’m going to be totally honest I’d never heard of the book’s subject – artist STANLEY SPENCER.

Even Margaret described him as so eccentric and downright odd that at times you think he must have been living on the Planet Zog.

The book is described as an “autobiography”, but as it ‘s written by the subject’s grandson, albeit derived from notes, diaries and letters from the man himself, I feel this is a bit of a misnomer.  In fact this book is merely the first of a three volume set. This first book was published in 2016 and the second in the series, “PROGRESS OF THE SOUL” had been due for publication before now, but has now seemingly been delayed for some reason, so should be published any time soon.

So what did Margaret make of this book? Would she recommend it and who might enjoy it?

Well listen here to what Margaret told me today: –