Simon’s involvement around the Club spanned many entities and over many years. He was a long standing Committee Member at the Supporters Club, where he was the DJ behind Loz Sounds as well as the voice of the Star Man Dinner and Dance. He was also the President of the Supporters Cricket Club and, of course, a lifelong supporter of Leyton Orient Football Club. Truly dedicated to the Club he loved and he will be much missed by the entire Orient Family.

In this episode Andy Gilson speaks to former players, fellow Committee members, fellow cricketers and people from around the Club who share their memories and pay tribute to Simon and his late wife, Lena who also sadly passed in November 2020.

REST IN PEACE SIMON (LOZ) AND LENA you will be forever missed and remembered fondly by all who knew you.

(Note that these memories and tributes have been collated via various sources so the sound quality may vary.) 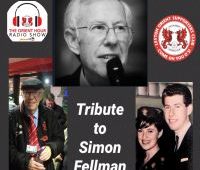