It took just ninety minutes to save the integrity of the league. News of Billericay Town’s decision to field what was construed to be a weakened side against third placed Saint Albans had set the keyboards twitching. Inconsiderate, short-sighted, unfair? It was none of the above.

A home side featuring six debut-makers from the U-23 squad never looked out of place in the hustle and bustle of step two football. Stand-in skipper, Rowan Liburd, put the Blues in front before the Saints struck back through Shaun Jeffers and Solomon Nwabuokei. 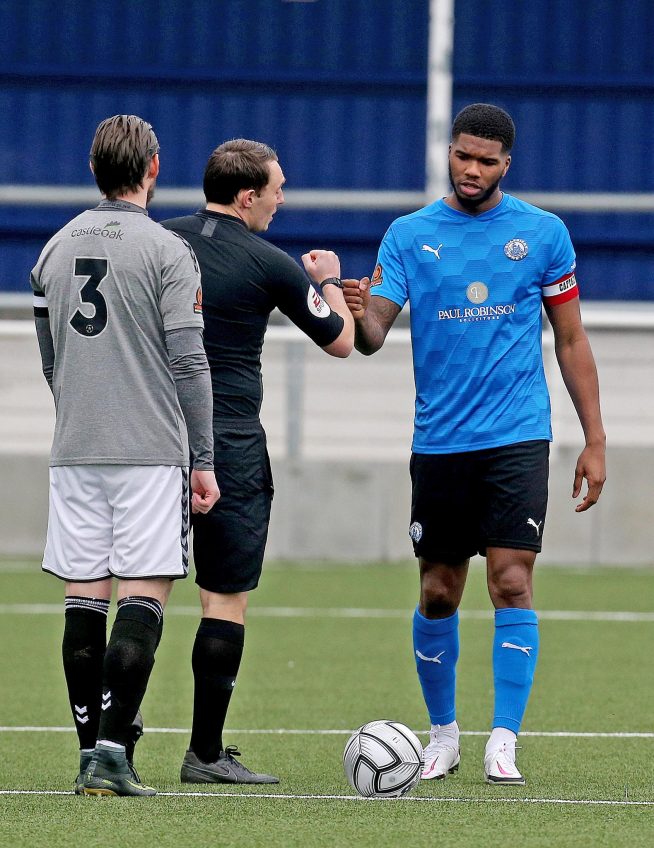 In a day when youth was given its head, it was fitting that the final word would go to academy graduate, Gabriel Ipanga Mbambo. On as a substitute, the striker carved out a moment that he will remember forever as he lifted home his first professional goal with only four minutes remaining.

Life is tough for non-league clubs right now. With spectators not permitted during current restrictions, income has dried up. Streaming revenues are welcome but insufficient to meet the bills. With football resuming after being under temporary suspension, and a vote to end the season in progress, the Blues had already furloughed the first team squad.

It may have been possible to consider the option of ducking the game. That Billericay did not, and felt confident enough to play a young side, is testament to the potential of the academy. This bold decision opened up the opportunity for the young players to try their hand at the real thing. It could have back-fired with a heavy defeat but sometimes it pays to roll the dice and live a little.

It was a risk to take the route that the Billericay chose but it paid dividends. Delighted manager, Kevin Watson, was notably emotional as he spoke post-match of his pride in the performance.

There is nonetheless more value here than a memorable afternoon. As an audition for the first team, it could not have been better. There is food for thought here even if a quick turnaround and a match versus rivals, Chelmsford City, on Monday may bring an altogether sterner test. 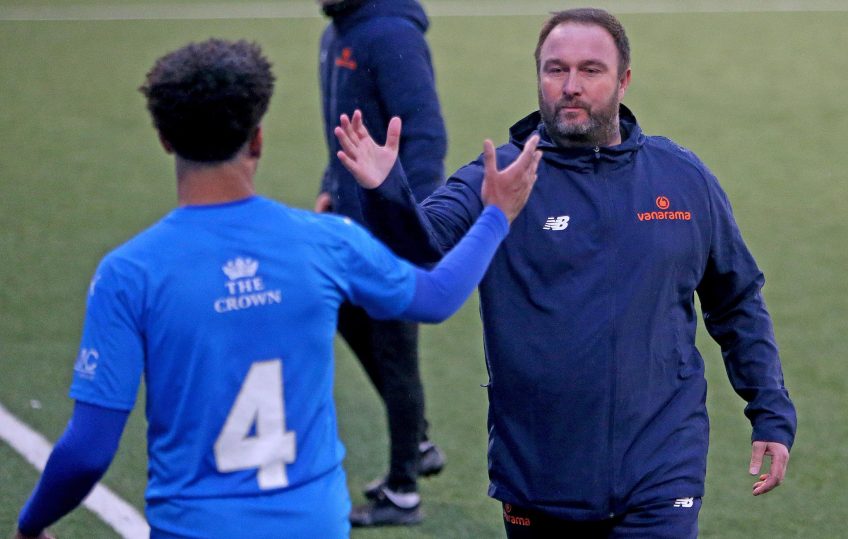 For Saint Albans it was business as usual as they fielded a near full-strength side. Only injured right-back, Devante Stanley, was missing. Known for the meanest defence in the division, by some distance, the Saints have only conceded seven strikes all season. Attacking statistics are less flattering but this side is good enough to ensure only one defeat has been incurred this campaign.

The Blues young guns were quickly tested subsequent to good approach play from the visitors. The ball was worked carefully from the right across the pitch to Zane Banton on the left wing. Seeking to find space behind the Billericay defence, an alert George Wind was on hand in the right back position to swiftly snuff out the danger with a well-timed intervention. The defender looked assured all afternoon with an incredibly mature performance for a seventeen year old. 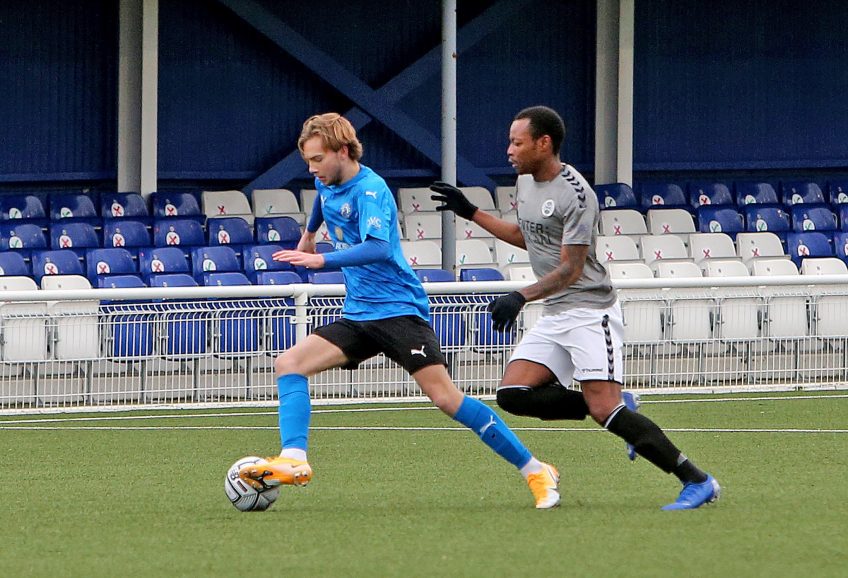 The level of intensity in team displays introduced by Watson after an indolent past was soon apparent despite the change in personnel. The terrier like, Craig Ferguson, snapped into tackles in his midfield role. He was joined by his team-mates in co-ordinated pressing that limited time and space on the ball sufficiently to ensure the Saints were always harried.

The first chance came from Darren Foxley’s corner as Reuben Soares Junior headed wide. Only 20, a first team squad member, he buzzed around busily on the right side. A clever ball carrier, given the opportunity, he caught the mood. In terms of work rate and diligence off the ball, he delivered his best performance for the club and linked well with Jake Nickless.

One such combination saw Nickless played into space behind the visiting defence. Seizing his opportunity, the midfielder curled a left footed shot narrowly over the bar. Also aged 20, Nickless, initially in the U-23’s, was added to the first team roster at the start of the season.

Previously at North Greenford United, he had impressed during the pre-season matches but injury had limited his involvement.  Loaned out to Harlow Town last October to recover his fitness, his return to contention for selection is overdue. Inventive, creative, technically gifted, there are still some edges to be rounded but he has talent that warrants examination. 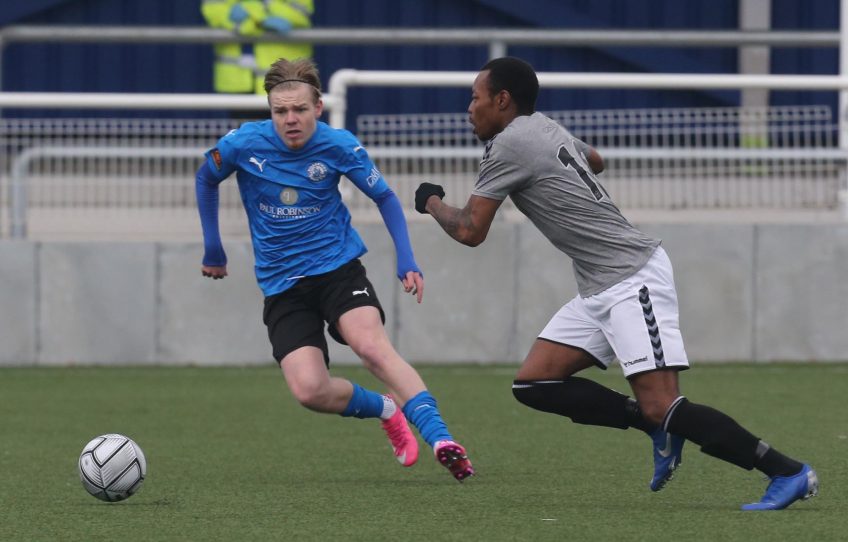 Liburd stands at the opposite end of the spectrum. Once a promising youngster at Billericay, he hit the back of the net enough times to earn a contract at Reading in 2015. His career has taken in the likes of Stevenage and Leyton Orient before returning to New Lodge recently. At 28, he found himself in the unfamiliar surroundings of being the eldest in the team.

He led by example with an energy level that matched the exuberance of the teenagers as he speedily closed down opposition defenders. A creator of chances too, his headed set-up allowed Foxley to fire the first shot on target albeit straight at goalkeeper, Michael Johnson.

Liburd made his mark soon after as he registered the opening strike on thirty-seven minutes. A hopeful lofted ball from Foxley was made into something more as the centre-forward unsettled the two covering Saints defenders. Seizing on Joy Mukena’s short headed back-pass, Liburd guided the ball over the onrushing goalkeeper to set up a simple finish. 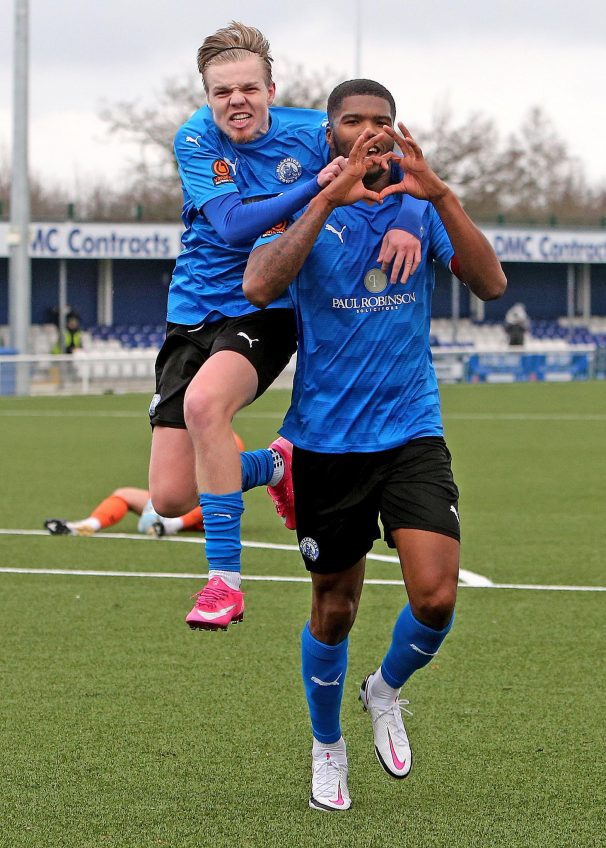 Rowan Liburd celebrates his opener for Billericay. Jake Nickless climbs on board to get in on the act. Photo Courtesy: @nickyhayesphoto

Saints improved after the break and soon tested the Billericay defence. Centre-back Henry Lukombo was equal to the task. Showing a useful fleet of foot, he matched Jeffers for pace as the striker chased a long pass. Snaking out a foot, he precisely diverted the ball away.

As the visitors turned the screw, the Blues conceded a spate of free kicks. One such set piece was cleared initially but retrieved by Sundire. Fortunate not to have been penalised for a foul on Nickless, the midfielder’s drive was heading into the top corner. Harry Palmer’s spectacular full-length dive ensured that the ball did not reach the intended destination.

Another set-play delivered by Saints’ Tom Bender brought the equaliser on fifty-eight minutes. As the ball was swung in from the right, it hit an unsighted Stratford. Falling perfectly for Jeffers, he reacted quickest as he drove home from twelve yards. Arriving from Chelmsford City in July 2020, it was his twelfth goal of the season in all competitions

Eight minutes later, the Saints took the lead after a series of headers went unopposed after a corner. Banton’s flighted delivery was first met by Bender. Heading wide, Kaloczi intervened to direct back across goal. Nwabuokei forced the ball home from close range.

Watson looked to his bench and found the answer in Ipanga Mbambo who came on to pull Billericay level. A goal crafted in the academy, Lukombo’s pass found his team-mate with plenty still to do. In an advanced position, the striker evaded defender Michael Clarke to smash the equaliser past Johnson for a dream debut in Billericay first team colours. 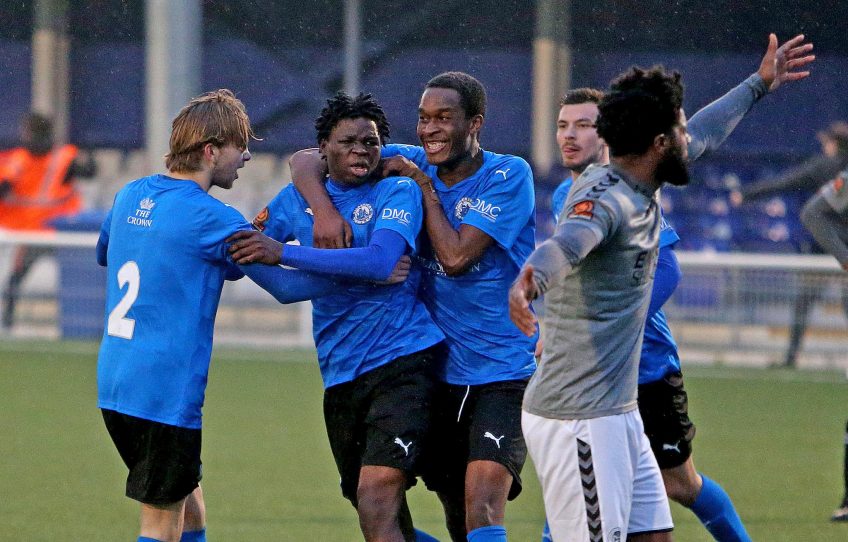 Man of the Match: George Wind.

Weathered early pressure down his flank, made vital tackles, and pushed forward regularly. Showed neat touches on the ball and passed intelligently in possession.