Why do you suppose the driver of a smart car was singled out to be pulled over by police? 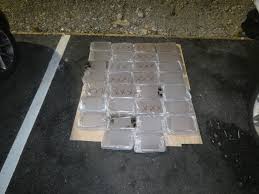 Turns out he had £3m worth of cocaine stashed away under a magnetically controlled secret compartment under his seat.

Surely this must have been the result of a tip off.

It seems that Sam Migliorini, 32, was pulled over last October by police between junctions 24 and 25 on the M25.

After being taken to a nearby car park, police discovered the existence of the secret compartment, operated via a magnet being placed on the centre console below the gearstick, which lifted up the front passenger seat.

Two sets of keys – one for a safe discovered at Mr Mr Migliorini’s Barking home was found to contain £15k, the other was for a Mercedes car which took off smartly as police arrived at his house, a large black holdall bag containing 30 one kilogram blocks of cocaine labelled ‘C.E.N.G – Cartel Ecuador Nueva Generacion’, one of the most violent drug cartels in Mexico and an encrypted mobile phone were also found

During police questioning he answered no comment to all questions, before being charged which did him a power of no good since he was subsequently sentenced 8 years and 3 months at Snaresbrook Crown Court.

One thing the car seems not to have been equipped with is a SAT NAV.

I mention this only because for today’s historical feature, Margaret Mills looked at the lives of Essex based father and son cartographers, John Walker Snr and Jnr, whose maps were renowned for the details shown and accuracy of the maps they produced – exceptional given that we are talking of the 16th century.

Right that’s me done for another week. See you again same time next week,
Scott