Breaking up is hard to do


Today we looked at a story, almost guaranteed to bring a tear to your eyes. 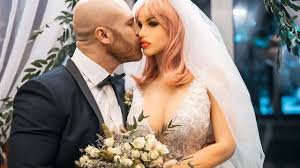 A body builder from Kazakhstan who married a sex doll in November, has revealed that she tragically broke just before Christmas.

Yuri Tolochko is now waiting to see, if and when his wife – called Margo – can be repaired.

Without explaining just how she got broken Mr Tolochko tearfully announced that Margo is currently in another city and that it will be a true gift for them both once she’s finally been fixed up.

Apparently the couple met at night club at the beginning of 2019 and he popped the question at the end of the year.

Sadly the wedding ceremony itself had been forcibly delayed several times due to the covid pandemic.

Pictures posted on Instagram show the bride dressed in a white lace gown whilst Yuri wore a black tuxedo for the ceremony in the Kazakhstan capital, Nur-Sultan

He posted a video which showed him putting a ring on Margo’s finger with members of the wedding party dancing and celebrating the occasion.

Other pictures posted on line show the couple enjoying dinner dates, bubble baths and holidays together.

They even have a pet dog, which is nice!

Being a Tuesday Margaret Mills joined me to talk about a man who was the Lord of the Manor of Weald Park and Weald Hall in the early part of the 19th century.

Known as Squire Christopher Tower, it seems that he hit on the idea of spinning goat wool, not as it turns out with a great deal of success.

But he was much better at breeding the animals.

If you missed what Margaret said, you can catch it all again here: –