In tonight’s Orient Hour hosts Billy Herring and Jamie Stripe are joined on the telephone by returning special guest ex-O Ricky Otto who reminisces further about his time at the Club, how Danny Carter had an major impact in helping him settle at the O’s, being compared to Laurie Cunningham and John Chiedozie, opportunities offered to him away from Orient and how football helped him turn his life around and how he is now a Pastor and involved in helping young offenders.

The panel discuss the recent result and performance against Southend United and review of the forthcoming fixture home to Salford along with responding to any questions and comments submitted via the usual forums.

Don’t forget, the next fixture is INCLUDED in your Season Card streaming pass. However, if you are not a Season Card holder and wish to subscribe to any of the forthcoming matches on the #OrientLive streaming service – Click Here to see the streaming passes on offer. 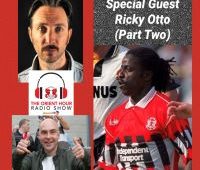 If you missed the first part of the Ricky Otto interview then click here to listen.