In tonight’s Orient Hour hosts Trevor Singfield and Keren Harrison are joined by Steve Tongue via telephone and there is an two-part interview with Director of Football, Martin Ling who discusses all matters Leyton Orient as well his involvement with Mind and personal fight with mental health.

The panel also discuss how it went with supporters being allowed back into the Breyer Group Stadium as well as recent results against Scunthorpe United (League 2) and Bristol Rovers (Papa John’s Trophy) and review the forthcoming League 2 fixture home to Newport County.

Don’t forget, this fixture is included in your Season Card streaming pass. However, if you are not a Season Card holder and wish to subscribe to any of the forthcoming matches on the #OrientLive streaming service – Click Here to see the streaming passes on offer. 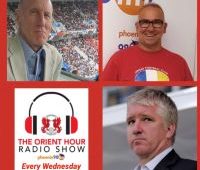