Billericay Town manager Jamie O’Hara left the club this week, ending an association spanning back to March 2017. Arriving in Essex initially as a player, he later became assistant manager, and in the Town’s hour of need, stepped up to fill the manager position.

To mechanically list his roles during his spell at Billericay and measure his impact in matches played and points gained would not be to reflect the overall impact he had. It was much more than that as he became the public face of the club, its advocate, squad re-builder, and a key contact point in the community outreach programs undertaken by different owners.

He took responsibility during the mayhem of the immediate post-Tamplin era and assembled a side when money was short and many in the team headed for the exit. A man for the crisis who delivered attacking play and, at times, made the football fun again. As time progressed, the club stabilised but results did not come. It was right to make a change.

He made 68 playing appearances, including 41 starts, and scored five goals.  A treble winner in the 2017/18 season under Harry Wheeler, a starter when fit in the first season back in the National South, he also had the ability to turn games when introduced from the bench. Fitness issues and management responsibilities brought those contributions to a close in the end. 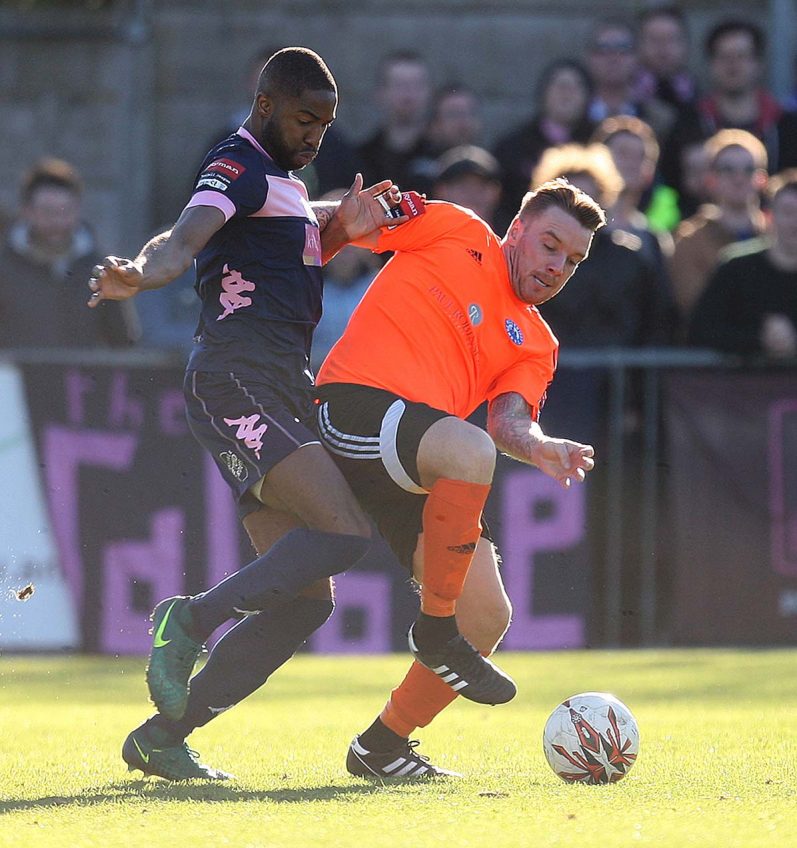 In charge for thirty-one matches across two seasons, he took on his first role in the hot seat in September 2019 at one of the most difficult times in the club’s history. The face of Billericay during its darkest days, he accepted what was a tough task for anyone and worked tirelessly to put together a team when the club struggled under huge financial uncertainty.

As the money ran dry and players departed, he drafted in the best that QPR U-23’s could offer, including the dynamic winger, Ody Alfa, and raided his contact book to beg and borrow available players from elsewhere to keep the show on the road. The slings and arrows of a vandalised pitch, player upheaval, and COVID failed to throw him off course. 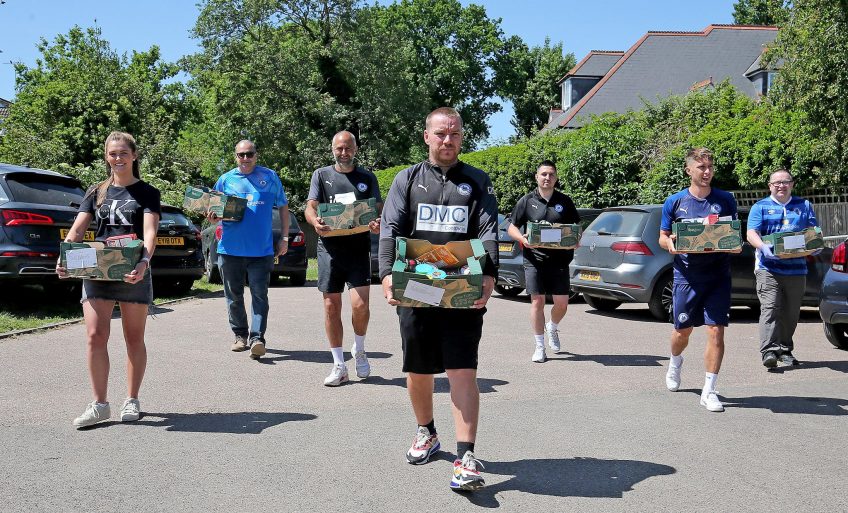 It would end as it always does for those in the management profession. A poor start to the new season, one defeat too many, and “discussions” leading to departure. Whilst his managerial tenure came to a close after a stinging home defeat to Hampton & Richmond, O’Hara’s contribution to Billericay should be judged on more than win/lose statistics.

To chart the course of his time in Essex, it all started with his unveiling at New Lodge under Tamplin. The arrival of the ex-Premiership player came with the usual national media fanfare. Presented the same day, little noticed record signing, Jake Robinson, also debuted with him in an away win at Dulwich Hamlet. 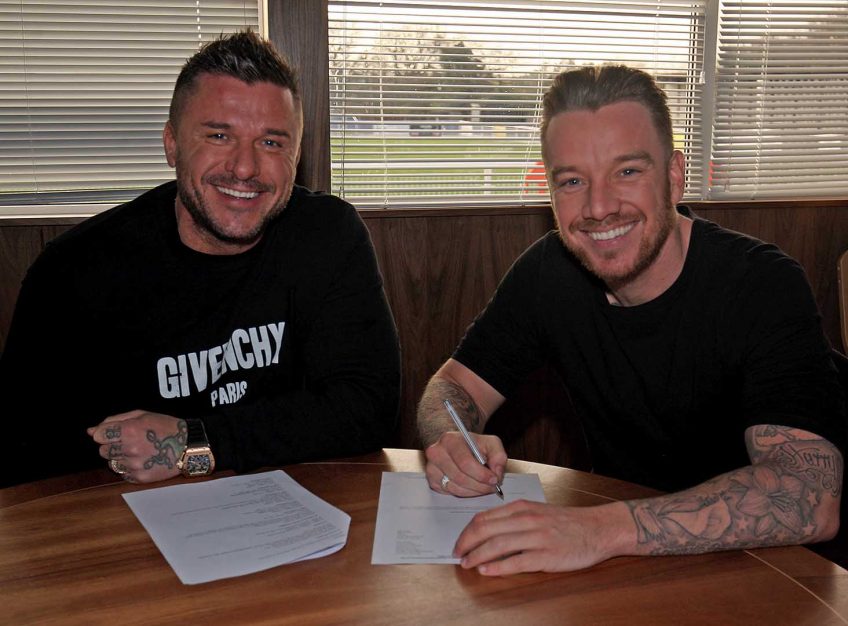 It could have been just another fading star looking for a last pay-day and publicity. It was nothing of the sort. Slotting into the team with ease, he engaged happily with fans, and was prominent in attending the club’s community initiatives to visit local schools.

Fresh from a spell on a TV reality show, while recuperating from a troublesome foot injury, a spell in Essex meant joining up with former team-mate, Paul Konchesky. Introduced to the owner by mutual friend, Mark Wright, O’Hara was snapped up on a “pay as you play” deal. Despite wildly inaccurate speculation, it was never about the money for him.

He impressed on the pitch with a fine debut goal in April 2017 via an overhead kick against Enfield. Described by the scorer as “the best goal of my career”, he showed his team focus, lamenting the fact that his strike had come in a home defeat.

He would be considerably happier later in the month. Starting alongside Konchesky, he won his first silverware at the non-league club, triumphing in the 2017 League Cup Final by 8-3 versus Tonbridge Angels. 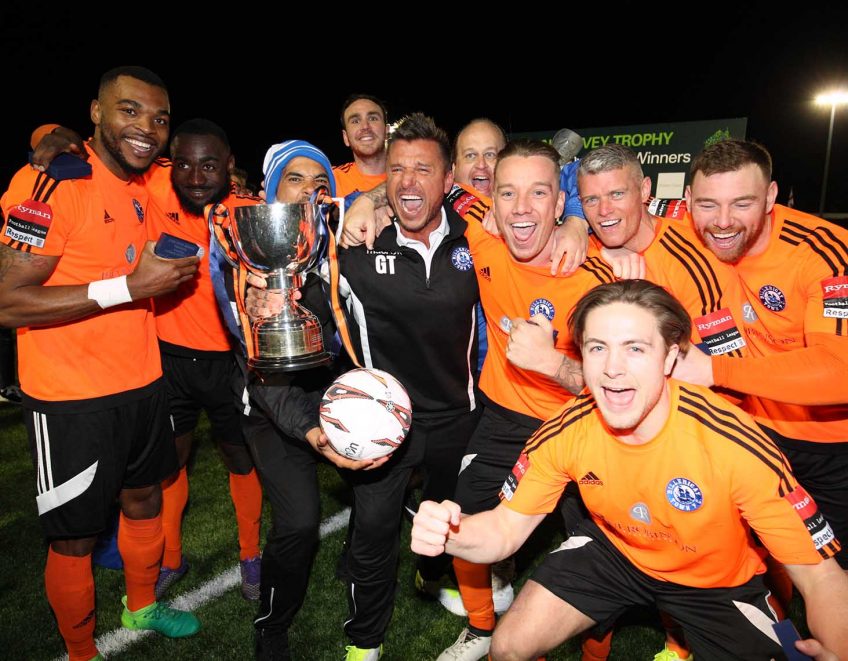 For a man that would play in Europe for Tottenham Hotspur, and feature in an FA Cup Final for Portsmouth, the Alan Turvey Trophy Final may not rank in his pantheon of great achievements. Nonetheless, the win did cement the side’s progress and offer him partial redemption as he valued every moment on the field in a career blighted of late by injury.

In what was the best season in the club’s recent history, O’Hara earned the accolade of treble winner. A substitute for the first leg of the triple, the 2018 Essex Senior Cup Final, he entered with 20 minutes remaining, in place of Calum Butcher, in the win over Chelmsford City. 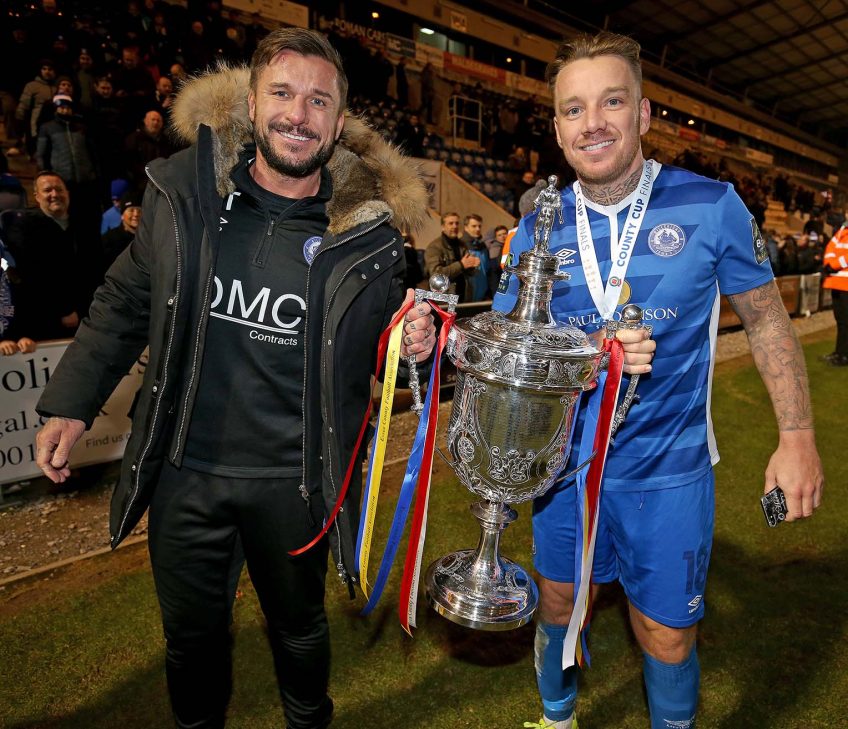 For the second stage, the League Cup, he started against Met Police in what was dubbed the “Bricknell” final, reflecting the striker’s impressive late hat-trick as Blues triumphed. With eighteen appearances, and three goals, O’Hara played a full role in the League campaign, earning himself a place in the Blues history as a treble winner. With his departure, only Robinson remains at the club after what was a unique campaign.

Despite a wobbly period in the New Year as Dulwich got closer, the Blues marched to the Isthmian Premier League Title in 2018. The season closed at New Lodge with an exciting 2-2 draw against Folkestone Invicta. Last word came from O’Hara as his outstanding stoppage time strike secured the point. 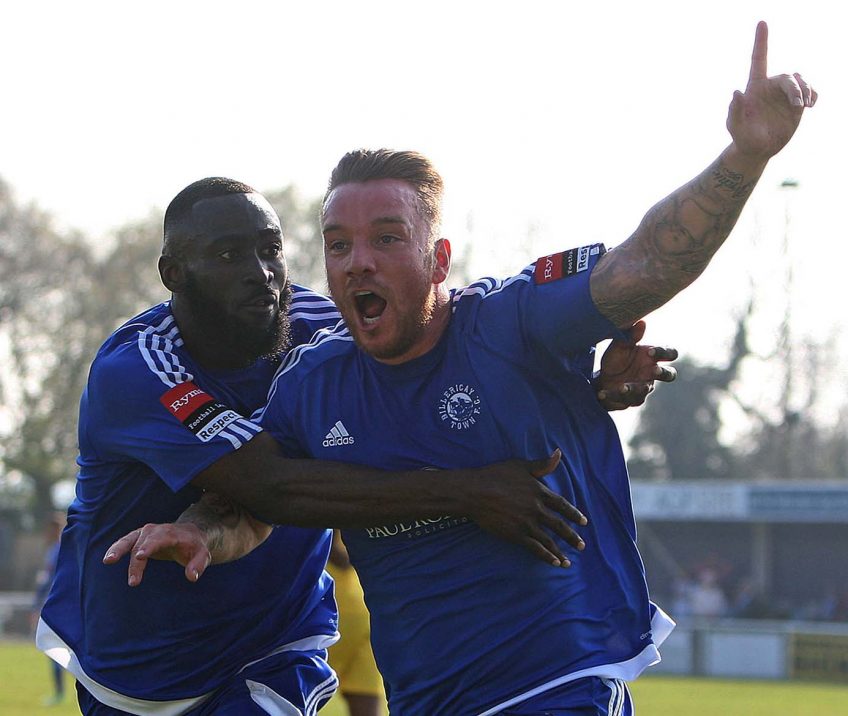 A step up to National South was no issue for a player of his quality and he soon settled into the team from the start of the 2018/19 season. Off the field, the Blues were never far from turmoil as new manager, Dean Brennan, was forced to tighten the purse-strings and reduce the squad. This led to O’Hara’s temporary departure in December 2018.

His absence would not be for long as the managerial revolving door exchanged Brennan for the “second coming” of Wheeler. Back came O’Hara in January 2019 in the role of coach and assistant manager. Keen to progress in the game and, with coaching qualifications obtained, O’Hara set about what he believed to be an extended spell learning his trade.

It did not turn out that way as, by September 2019, dramatic developments had unfolded. With Wheeler absent, O’Hara effectively assumed the manager’s job although both he and the fans did not know it at the time. Standing in for an absent boss, an away draw was gained at Oxford City. The following week, Wheeler had departed the club and O’Hara was formally installed as “caretaker” manager.

As Tamplin confirmed his intention to depart, and the funding was severed, O’Hara was left to hold the football side together. Working overtime to fill the gaps in the team created by departing players, his efforts ensured there was a respectable team on the pitch. Former Spurs U-23, Jamie Reynolds was drafted in to fill a full back berth and a personal call asking Acea Laurent to return for an FA Cup tie was heeded.

In addition, three new players were brought in by the ex-Spurs man; midfielder, Darren Oldaker, winger, Alfa, and full-back, Arjanit Krasniqi, all debuted. It did the trick and he steered the team to a vital FA Cup win against Basildon United to secure the £6,750 prize money. Rarely has a game been so important to win with the cash lifeline much needed. 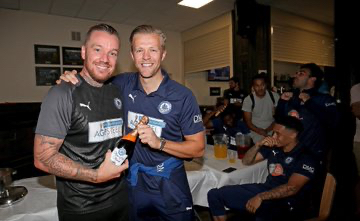 The FA Cup provided the scene for one of O’Hara’s most memorable achievements in the hotseat. Billericay goalkeeper, Alan Julian, will enter into Cup folklore for his last-minute headed goal at Sutton United to earn a replay back at New Lodge. Yet another O’Hara acquisition, centre-back Themis Kefalas, came in to bolster numbers on loan from QPR.

The replay belonged to O’Hara as his team swaggered to victory, destroying the higher ranked Sutton with a devastating display of attacking football. In front of watching new owners, the 5-2 home win to take Blues into the 1st round proper sealed his appointment under new ownership. 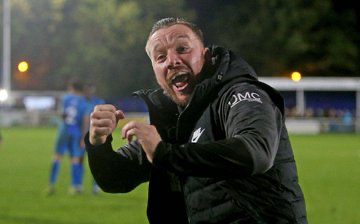 At the start of November, the club was devastated by the destruction of the pitch by vandals. O’Hara, who had impressed in his short period in charge came to the fore. Declaring, “We will keep going strong like we have been, every time I’m at the stadium, I feel the community coming more and more together”, he rallied despondent fans.

Immediately at the site of the damage, he mingled with supporters in the clubhouse and organised an impromptu open training session at a nearby school. Showing leadership at a time of adversity, he provided hope for a brighter future.

The series of home cancellations due to the condition of the pitch were to do him no favours. By Christmas, the Blues were running with up to three games in hand and had slipped down into the bottom half of the table.

Off the field, two of the club’s best players, Deering and Emmanuel, had departed while O’Hara had to make do and mend with what he could find. In came striker, Deon Moore, on loan from Bristol Rovers, and midfielders, Faysal Bettache, on loan from QPR, and Jacob Cook, from Wealdstone. All three debuted at Dulwich, as O’Hara got his first League win. 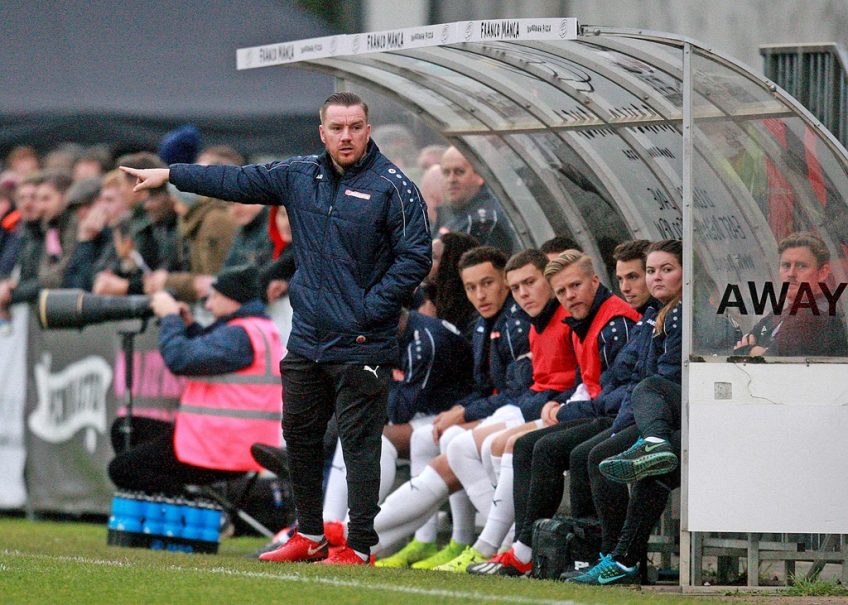 O’Hara directs operations from the dugout to earn an away win at Dulwich in November 2019 Photo Courtesy: @nickyhayesphoto

Further wins proved elusive but, on the whole, the team played entertaining football. Matches were packed with goals, incidents, and, incoming striker, Femi Akinwade, proved an inspired choice as he rapidly climbed the scoring charts and became a fan favourite. As late comeback’s saw the opposition turn potential wins into draws, and further away successes remain stubbornly out of the reach, the Blues drifted down the League.

The season ended in difficult circumstances amid the COVID shut down with a chastening defeat away at Welling. With the campaign subsequently brought to a halt without relegation, the Blues ended up 18th in the table, a single point clear of the bottom three. 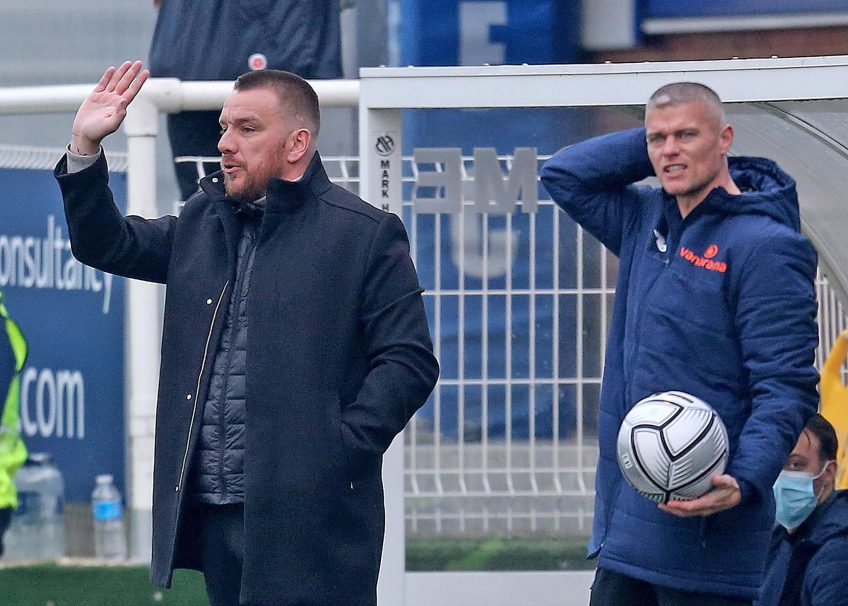 With survival assured, and plenty of extenuating circumstances, hopes were high that a new season with a recently installed 3G pitch and wholesale squad change would bring a better future.

It did not turn out that way as a run of defeats to begin the campaign proved too difficult an obstacle to overcome. A mini recovery, including two straight victories, helped to steady the ship. Shipping six at home to Hampton proved to be the end.

O’Hara will be fondly remembered at Billericay for his overall contribution, which went far beyond his achievements in the dugout. In a non-League game characterised by comings and goings, he lasted the course and cared deeply about the club and the fans. He still does.