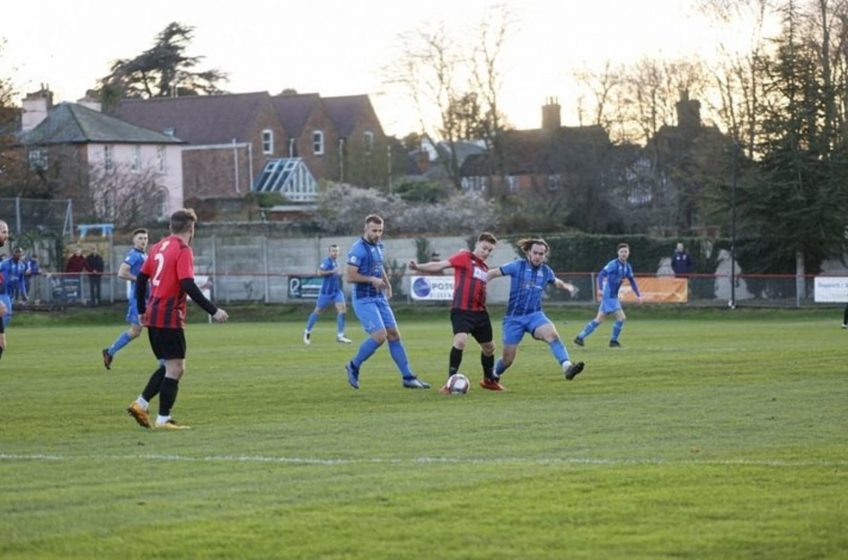 Hashtag United’s Vase campaign hit the buffers at Fakenham Town after a lively encounter which saw neither side break the deadlock despite a number of chances. The hosts were awarded a penalty in the 11th minute but Anthony Page showed his goalkeeping acumen as he dived low to keep the shot out. The hosts continued to cause problems upfront for the remainder of the half, although the Tags did manage a spell of pressure towards the end of the half. Albert Keith almost capitalised on a goalkeeping error in the 52nd minute, but he could only steer his shot wide. The chances then came for both sides; Fakenham seeing shots drilled wide or over the bar, while at the other end Harry Honesty delivered a deep cross which George Smith just failed to connect with at the back post. Page however had plenty of work to do, pulling off a number of quality saves to keep Fakenham out; and Tags substitute Sam Bantick almost made it a debut to remember when he fired a shot inches over in the 78th minute, before then having a volley saved in the closing stages of the tie. Amazingly the ninety minutes had produced no goals but had provided plenty of drama and more was to follow as the game went to penalties. Ross Gleed opened the show with a goal, and the Tags looked in a good position as Fakenham saw their first penalty palmed onto the crossbar by Page. Sam Byles had his penalty saved, but Page then pulled off another save. Kris Newby scored his penalty, but George Smith saw his one parried and the hosts levelled up at 2-2. Jesse Waller Lassen fired the Tags into a 3-2 lead, but the hosts then scored their final penalty taking the tie into sudden death. And it was here that Hashtag’s campaign came to a cruel end as Reece Hewitt’s penalty was saved, followed by Ashley Jarvis converting his penalty to see Fakenham Town win the tie 4-3 on penalties. Clapton maybe winless in the ESL but they are embarking on a Vase campaign that has seen them beat their previous best in the competition. The Tons had reached the 2nd Round of the Vase on three previous occasions: 1989/90, 1992/93 and 2003/04. Daniel Emovon fired the Tons into a 34th minute lead, but Cain Mann netted an equaliser for Hamworthy United early in the second half. However Eleftherios Metso went on to make Tons history as his winner in the 78th minute means that Clapton now go into the 3rd Round of the Vase for the first time. Of course Hadley themselves have a history that goes as far back as 1882, and they themselves were making history on Saturday as their 4-1 win over Raynes Park Vale saw them beat their previous best performance in the Vase. Quick-fire goals from Hadley saw Luke Alfano’s opener on 24 minutes doubled a minute later by Solomon Ofori. The visitors pulled one back in the 47th minute after a melee saw Tom Harland Goddard get the final touch to get the ball past the line. However Teddy Stacey restored Hadley’s two-goal advantage four minutes later; the Bricks finally put the game to bed, and their name in the 3rd Round draw for the first time in their history, in the 77th minute when Ofori scored his second goal of the afternoon. Ilford’s Vase campaign ended at the hands of Colney Heath who had to withstand some solid Ilford pressure at times – but the difference was that the Spartan South Midland League high flyers made their chances count. Jack Woods notched a brace, with Harry Shepherd and Martin Standen being the other marksmen. The Foxes certainly gave a good account of themselves though, having to twice come from behind as Dion Lewis-Kirwan and Naseer Ishanzadeh both got their side level from headers. However Ilford were unable to make their pressure count where it mattered and that was to count against them.

With leaders Hashtag United on Vase duty it meant the chasing pack had a chance to play catch-up. Stansted were able to close the gap to two points after a slender 1-0 win over bottom-placed Woodford Town. Billy Coyne supplied the winner in the 22nd minute, and it was similar fair over at Lowfield as 3rd-placed Cockfosters won their game at Hoddesdon Town by the same result. The visitors left it very late before sealing all the points as George Beattie’s match winner came in the 92nd minute. 4th-placed Saffron Walden Town also picked up all the spoils with a 4-0 home win over Redbridge. Suaibo Balde, Luke Wilson, Ross Kochan and James Crane supplied the goals. Walthamstow returned to action after the lockdown break with a 3-0 home win over Sporting Bengal United. Stow got off to a flier and were 3-0 up at the break as Callum Ibe, Connor Scully and Jon Clements scored a goal apiece. At that stage it looked like Stow were going to win at a canter, and they had their chances in the second period, as did Bengal but their was to be no further scoring and the result sees Walthamstow sitting 5th, while Bengal occupy 11th. St Margaretsbury won their second game on the season as a Tom Cowell goal was enough to see off Enfield. The win keeps them down in 16th but has opened up a safety net between themselves and Clapton and Woodford Town who sit beneath them. Southend Manor picked up a handy three points at Sawbridgeworth Town. Jake Skeet and Charlie Daniels were on target for the Robins, but they were shot down by Billy Harrison, Kiah Froud, and Luke Jackson, with Manor’s third goal perhaps being the pick of the bunch as Alex Jenkins drilled a free kick home. Manor now sit 12th, one place above Sawbridgeworth.