Written by Paul Golder in In The Papers👁 148 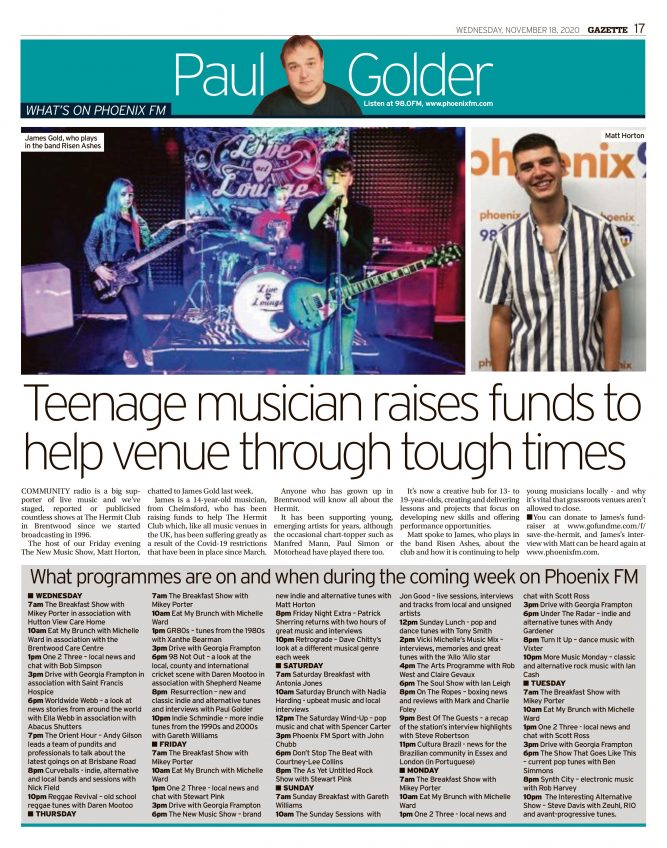 Community radio is a big supporter of live music and we’ve staged, reported or publicised countless shows at the Hermit since we started broadcasting in 1996.

The host of our Friday evening show The New Music Show, Matt Horton, chatted to James Gold last week. James is a 14 year old musician from Chelmsford, who has been raising funds to help The Hermit Club in Brentwood which, like all music venues in the UK, has been suffering greatly as a result of the Covid-19 restrictions that have been in place since March.

Anyone who’s grown up in Brentwood will know all about the Hermit – it’s been supporting young, emerging artists for years although the occasional chart-topper such as Manfred Mann, Paul Simon or Motorhead have played there too.

Matt spoke to James, who plays in the band Risen Ashes, about the club and how it is continuing to help young musicians locally – and why it’s vital that grassroots venues aren’t allowed to close.

You can donate to James’s fundraiser at www.gofundme.com/f/save-the-hermit, and James’s interview with Matt can be heard again at www.phoenixfm.com.