In tonight’s Orient Hour hosts Stuart Minchin and ex-O Terry Howard are joined on the telephone by two other ex-O’s in fine form of Glen Wilkie and John Mackie.

The panel discuss the recent disappointing results against Newport County in the FA Cup and Charlton Athletic in the EFL (Papa John’s) Trophy. Dave Victor gives us Victors Views as well as his post-match interviews with Ross Embleton. There is also review of the forthcoming fixture away to Colchester United as well as your questions and answers.

Don’t forget, if you wish to subscribe to any of the forthcoming matches on the #OrientLive streaming service Click Here to see the streaming passes on offer. 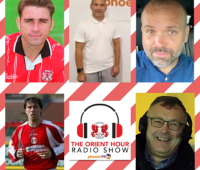