Billericay remain pointless this season at the foot of the table after four matches subsequent to defeat to visitors Ebbsfleet United. A ghost from the past emerged to haunt beleaguered Blues boss, Jamie O’Hara, as former player, Jack Paxman, scored on his return.

Falling behind to Bobby-Joe Taylor’s free-kick, Paxman’s effort proved to be the winner for the Fleet as a second half consolation strike from Jake Robinson was not enough.

Ebbsfleet became the latest grateful recipients of three points on their visit to a ground that once resembled a fortress. Flaky away performances could previously be excused as aberrations, with regular points harvested at New Lodge ensuring League respectability. That is no longer true as the first team lost the knack of winning matches some time ago.

In the opening exchanges, the visitors were afforded plenty of time on the ball. German centre-back, Sefa Kahraman, never shy of advancing forward in possession, was able to build attacks from the back unhindered.

Paxman, given an enhanced role as play maker by manager, Dennis Kutrieb, enjoyed early prominence, regularly distributing the ball to wide areas. Marauding left back, Taylor, was a willing foil, energetically bursting down the flank.

Billericay set up conservatively as lone frontman, Robinson, battled to impose himself. With midfield security supplied by Doug Loft and Frankie Sutherland, it was mainly incumbent on Joe Felix to break forward from midfield to offer an added goal threat from central areas. He had some success linking with Blues two wingers, Luke Wanadio and Kyel Reid.

First, served by Wanadio, the diminutive midfielder fired powerfully wide. Moments later, a cross from the opposite side was seized in the nick of time by the Fleet goalkeeper, Jordan Holmes, as Felix was ready to strike.

In what was largely an uneventful first quarter, the best Ebbsfleet could muster was a hurried strike from Ben Chapman, which flew well off-target.

The visitors took the lead with what looked to be an avoidable strike. Penalised for a foul by Felix, the resultant free kick near the right-hand touchline should have been no more than a cross.

As Taylor curled in the ball with some pace, it flew past the retreating Michael Chambers and, bouncing in the six-yard box, went over the flailing arm of Dion-Curtis Henry.

It could have been worse on the half hour as Ebbsfleet saw a team goal involving eight outfield players ruled out for offside. Having intercepted a long pass from Billericay’s Chambers, play switched from the right flank across to the left.

Paxman was soon involved as his precise diagonal via Taylor found Lee Martin. The ex-Manchester Utd player’s swerving drive could only be parried to the predatory Reece Grant who netted to no avail.

Minutes later, Fleet did have their second as a poor Paul Konchesky pass was intercepted by the phantom of New Lodge. Ghosting in, Paxman tricked his way through the Billericay backline and treated himself to a sumptuous goal as his right footed strike flew by Henry.

That such form was never shown consistently in Essex is a point of some regret. A highly skilful player, he shone brightly on occasion but was never able to nail down a regular start. 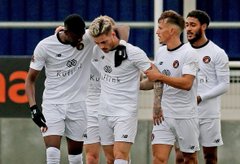 Billericay’s main danger man, Wanadio, did his utmost to hand his team a lifeline back into the game. One of Billericay’s strongest signings of the season, the speedy winger is well capable of holding defenders spellbound with his box of tricks.

Escaping down the right with a burst of pace, he fizzed in a low cross that saw Reid felled for a penalty.

Robinson stepped up but must have crossed a black cat on his way to the game as his driven effort towards the right corner was pushed away impressively by Holmes.

As the only Robinson spot-kick ever saved during his time at the club, the golakeeper deserves great credit for a fine stop. 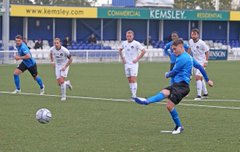 With the Blues facing a two goals deficit, lacking presence in the final third, and not sharp enough in applying pressure on the man in possession, changes were needed. At half-time, on came target man, Josh Hutchinson, for Konchesky.

With extra support for Robinson, and a switch in formation to a back three, Billericay looked better and appeared to be making headway.

On the hour, extra creativity was chosen with the arrival of chief sorcerer, Jai Reason. He replaced holding midfielder, Frankie Sutherland.

Chances were traded with the visitors as a fierce drive from Chapman drew a diving stop from Billericay’s Henry while a Reason curler from range saw Ebbsfleet’s Holmes back-pedal quickly to tip over the bar.

With home players pushed forward, the Kent side were quick to counter and exploit spaces. On one occasion, Grant threaded the ball through to Martin who turned inside ex-Ebbsfleet full-back, Lawrie Wilson, to rifle in a shot that Henry was able to capture securely.

Hutchinson’s arrival and aerial prowess discomfited the visitors as he started to link up with his strike partner. The forward alliance would bear fruit on 68 minutes as the striker flicked on a Reason through pass into the path of Robinson.

With plenty still to do, a neat change of direction took him inside Adebayo-Rowling and, avoiding the lunge of Taylor, the striker hit a firm drive into the bottom corner to give the Essex side hope of a comeback.

After Martin missed a good opportunity to make the game safe, skewing a Michael West cross over the bar from close range, Billericay had most of chances in the final fifteen minutes.

Working out rather belatedly that the high ball allied to the height of Chambers and Hutchinson could be effective against the visiting defence, the Blues were more direct.

Hutchison was increasingly prominent in the final stages as he headed on for Robinson to fire a drive that was cleared by the backline. Next his persistence saw a chance carved out as he shot across the six yards box from a tight angle.

The best opportunity to secure a point came in stoppage time as a floated Reason free kick was nodded on in the penalty area by Chambers and then Hutchinson creating a good chance for the substitute, Fenelon.

The winger swivelled rapidly but hit his shot too close to Holmes who was able to push away to a waiting defender for final clearance.

It was not a Halloween horror show but it was a sadly familiar story and ending. The Blues’ results track record now reads worse than a low budget slasher movie script.

Can the leading man hold off the ghostly hordes and banish the spectre of a trip to the world of the undead, previously known as the Isthmian League?

Will the slaying of the hounds of Hemel allay the fears of the people? The story continues.