Written by Paul Golder in In The Papers👁 241 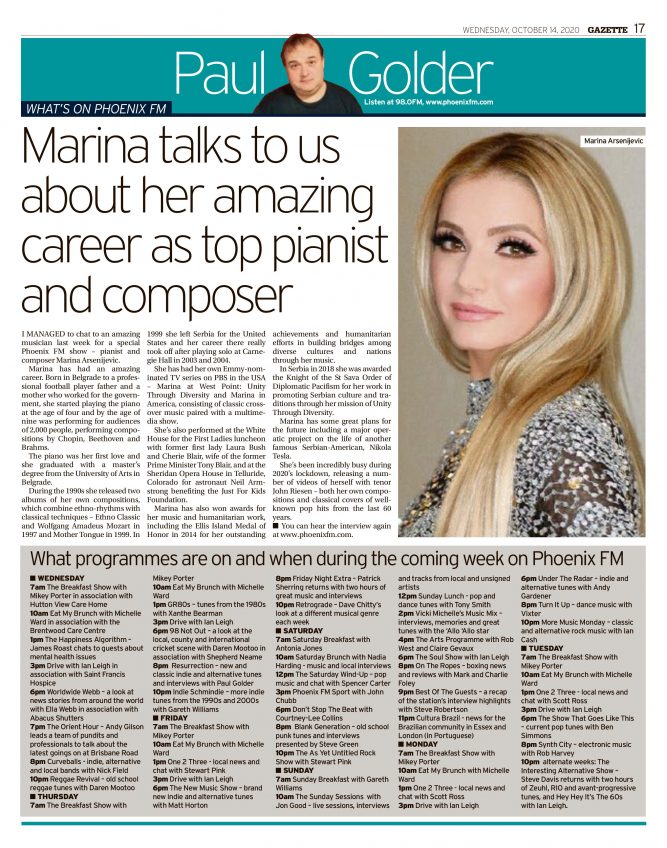 I managed to chat to an amazing musician last week for a special Phoenix FM show – pianist and composer Marina Arsenijevic.

Marina has had an amazing career. Born in Belgrade to a professional football player father and a mother who worked for the government, she started playing the piano at age four and by the age of nine was performing for audiences of 2,000 people, performing compositions by Chopin, Beethoven and Brahms.

The piano was her first love and she graduated with a master’s degree from the University of Arts in Belgrade. During the 1990s she released two albums of her own compositions, which combine ethno-rhythms with classical techniques – “Ethno Classic & Wolfgang Amadeus Mozart” in 1997 and “Mother Tongue” in 1999.

In 1999 she left Serbia for the United States and her career there really took off after playing solo at Carnegie Hall in 2003 and 2004. She has had her own Emmy-nominated TV series on PBS in the USA – Marina at West Point: Unity Through Diversity” and “Marina in America”, consisting of classic crossover music paired with a multimedia show.

She’s also performed at the White House for the First Ladies luncheon with former first lady Laura Bush and Cherie Blair, wife of the former Prime Minister Tony Blair, and at the Sheridan Opera House in Telluride, Colorado for astronaut Neil Armstrong benefiting the Just For Kids Foundation.

Marina has also won awards for her music and humanitarian work, including the Ellis Island Medal of Honor in 2014 for her outstanding achievements and humanitarian efforts in building bridges among diverse cultures and nations through her music. In Serbia in 2018 she was awarded the Knight of the St. Sava Order of Diplomatic Pacifism for her work in promoting Serbian culture and traditions through her mission of Unity Through Diversity.

Marina has some great plans for the future including a major operatic project on the life of another famous Serbian-American, Nikola Tesla.

She’s been incredibly busy during 2020’s lockdown, releasing a number of videos of herself with tenor John Riesen – both her own compositions and classical covers of well-known pop hits from the last 60 years.

You can hear the interview again at www.phoenixfm.com.