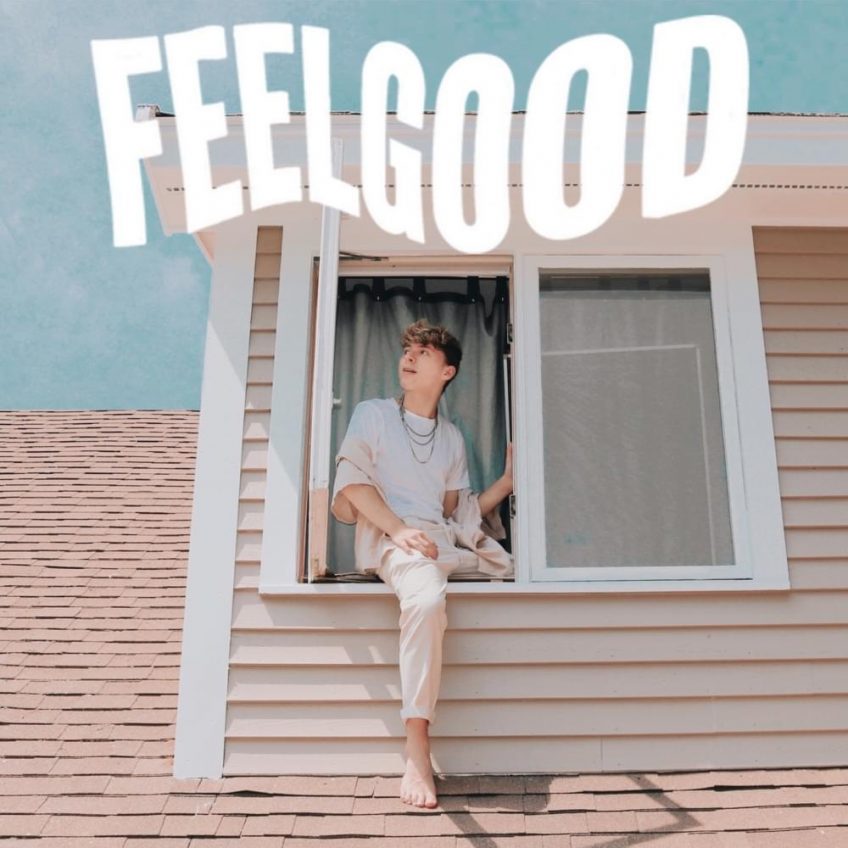 We’ve been giving lots of airplay to Angelo David’s track Feelgood, a song which, with COVID-19, the US election, and world anxiety soon to be behind us, he describes as the “Feelgood” Summer Song of 2021!

We chatted to Angelo about his life and music.

I began writing songs in elementary school to find a certain belonging that I couldn’t achieve in my own life. I abbreviated my name to “Angy” in 2013 and released my first physical CD, “Mirror”.

I also released music videos for “House is Burning Down” (a song about being bullied) and “Mirror” (an introspection).

On 8 June 2013, “House is Burning Down” trended at #4 worldwide on YouTube as one of the most popular music videos around the web.

Before finding the alternative/indie pop scene, I enjoyed listening to many of the young females who shaped mainstream pop music and took risks artisitcally with their songs, videos, shows or messages.

Lady Gaga is one that comes to mind – I remember listening to Gaga’s albums and then watching stripped-down performances of those same songs on YouTube.

This is where I became intrigued with production and how a ballad can be transformed into a fully-produced masterpiece.

Simultaneously, I grew up with a rocker mom who fronted a band herself, so much of what I heard around the house was the local rock station. Bands like Fleetwood Mac, Blondie, U2, Pearl Jam and the Rolling Stones showed me an edge and rebellious nature that I fell in love with.

My music blends elements of pop and R&B with a certain edge that I’m moving into as I continue to release.

That’s the beauty of being an artist: being able to transform your sound over time and showcase new parts of you, just as people do in our individual lives.

I have written, produced, recorded, mixed and mastered a collection of over 50 songs that I plan to release throughout this year and next.

However in total I have hundreds of songs that I have written, even if they are not fully produced.

Throughout middle school and high school I released a collection of songs and met someone who offered a “promotional opportunity” that promised exposure on streaming platforms.

Since I was young, I didn’t see that this was a faulty deal which would eventually lead to my songs getting taken down from streaming services.

I have been forced to start over but am lucky that I can learn and grow from an experience like that. So far I have released my two singles, Feelgood and B&W, which can be found on Spotify, Apple Music, YouTube, Amazon Music and Pandora.

I plan to release my next single on November 13 – stay tuned!

After years of absorbing different genres, I find myself most attracted to the edgy and dare-to-be-different blend that is alternative/indie music and pop.

Artists like Halsey, Troye Sivan, Billie Eilish, Frank Ocean and bands such as The 1975, COIN, Lany and Wallows are some of the people you would see in my daily playlist.

And of course let’s not forget those who preceded this new generation of artists – some of whome I mentioned before – such as Fleetwood Mac, Echo and the Bunnymen, Bread, Blondie, U2, Pearl Jam etc.

I would love to collaborate with someone like Halsey. She is so involved with the creation of her art and I know that we would genuinely work together from scratch as opposed to letting someone feed us the lyrics and beat.

Also, can we just talk about her voice and BDE (iykyk)! She’s a badass.

I’m currently on a gap year, a journey that I’m documenting much of on my TikTok (@itsangelodavid).

I describe this year off as not only an opportunity to grow as an artist and build up my discography, but to listen to myself more.

You can’t grow as an artist if you’re not simultaneously growing as a person. High school stunted me in a way that I think it stunts a lot of kids, especially artsy individuals, so I’m eager to move forward from that.