Billericay Let it Slip to Exit Cup at Brackley


Billericay Town exited the FA Cup on penalties at National League North Brackley Town. Having built a lead through Jai Reason and Jake Robinson, the Blues let it slip in the final ten minutes as home debut maker, Bradley Rolt, struck twice to send the match to a shoot-out. In a finale, all behind closed doors, Brackley’s Matt Lowe fired home the winning penalty.

The personnel may be different but familiar failings continue to haunt the Essex side. An encouraging overall performance, that saw the Blues gain the initiative despite being under sustained pressure, was tainted by the added time leveller. Josh Hutchinson and Paul Konchesky both suffered from the spot as their strikes were saved by Danny Lewis.

Almost constant rainfall since the previous afternoon relented temporarily to allow the match to progress without its intervention. With the well-drained pitch in pristine condition, and a credit to the efforts of the home ground staff, it was understandable that a little rustiness should show as both sides undertook the first competitive fixture of the season. 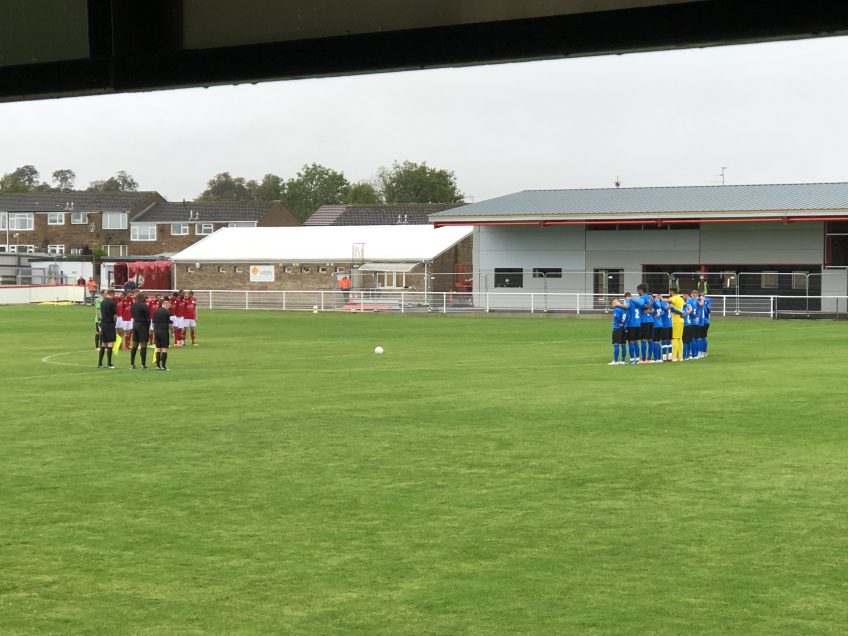 Both sides observe a minute’s silence in honour of Brackley’s Mick Hawes.

In the opening minutes, home centre-back, Harry Flowers, was close to starting with an own goal as his defensive header was hurriedly hacked off the line. At the other end, a mix-up between Billericay’s Michael Chambers and goalkeeper Dion-Curtis Henry momentarily raised anxiety as striker, Wes York, on the prowl, was thwarted by concession of a corner.

An early strategy from Brackley saw a series of flighted passes hoisted into the final third to test the Billericay back three. Konchesky had to be at his most alert to cover a break from York and, shortly after, to block a shot from the striker. Heavily involved in the early stages, York combined with right winger, Lowe, to strike on goal but screwed the effort wide.

The initiative was held by Brackley who pushed forward relentlessly. In response, visiting centre-back’s Ronnie Henry and Chambers stood out with timely interventions. First, Henry, headed clear one of many high balls that were sent over to test his aerial skills. Chambers, who had an outstanding match, was also called into action to thwart centre-forward, Lee Ndlovu, with a timely challenge in the penalty area as he sized up a chance to shoot on goal.

Billericay served notice of an ability to offer their own threat through winger, Luke Wanadio. Sent clear by Robinson, his strike into Lewis’s midriff was the Blues first shot on target. A break down the left flank from Shamir Fenelon had promise but, when held up by the covering Flowers, he fired waywardly from range rather than seek to beat the Brackley man.

By the mid-point of the first period, the match settled into a more even contest and both sides exchanged chances. Flowers rose well to direct a corner into Henry’s grateful grasp. In response, Robinson fired wide at the far post after Chevron McLean’s left-wing cross had been palmed towards him by a stretching Lewis who failed to grasp the centre in the wind.

Brackley should have taken the lead on the half hour. That they did not was down to a swift reaction by defender, Henry, who raced out to divert Shepherd Murombedzi’s strike onto the post. One of his flock should really have converted earlier as the initial chance was created by Ndlovu. His cross was perfect for York but he failed to convert from eight yards.

There would be regrets for the Saints as Billericay took the lead on the stroke of half-time. Profiting from a poor clearance, midfielder, Joe Felix, took possession and hit a low strike from 25 yards. Striking the post, the ball rebounded out to the left side of the area. With Robinson expecting a cross, Reason took control and, from the angle, fired past Lewis. 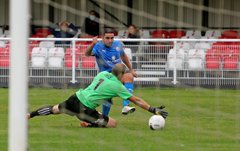 Stung by falling behind, when arguably the better side before the break, Brackley started the second half strongly. Substitute, James Armson, on to strengthen the front line, played in Ndlovu. Breaking through, his fierce strike forced Henry into a diving save to his left. Once more, Ndlovu caused problems as he broke through on the right. Beating McLean, the left wing back endured a nervous moment before his foul was adjudged to be outside the box.

Despite the pressure, expertly repelled by the foreheads of Chambers and Henry, Wanadio was always a danger on the counter. Benefiting from electric pace, his ability to turn a hopeless chase into a good pass deceived the lumbering Flowers on the left side. Securing possession, his inch perfect cross found Robinson who headed home at the far post. 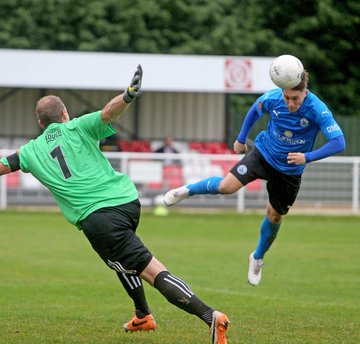 Just past the hour, Wanadio was close to creating what would have been the killer goal even noting Billericay’s habit of late collapses. Driving forward from the halfway line, his cross found Reason. Caught in two minds, he headed beyond the waiting Robinson and wide.

Brackley sought to change their luck by shuffling the pack and brought on two strikers, signed only that morning, with around 25 minutes to make an impression. Tre Mitford, acquired from National North rivals, Kettering Town, and 17 years old forward, Rolt, a product of the Peterborough United academy, came on for York and left back, Connor Franklin, as the home side threw caution to the wind. Rolt would remember his debut.

As the match ticked into its last ten minutes, Shane Byrne broke free on the right and, deep into Billericay territory, crossed invitingly. Queueing up around the penalty spot, Rolt nudged himself ahead of Ndlovu to fire his new team back into the match. With two late goals conceded to draw the last friendly match with Maidstone United, and the ghosts of last season rising to the surface, tension visibly rose.

As the Blues retreated, leaving only Wanadio up as an attacking option, Brackley sensed the comeback was on. Clearances and blocks were made but the ball returned into the Billericay danger area with concerning regularity. As the match entered stoppage time, Ndlovu made one last break down the left. Held up by Konchesky, he squared to Rolt who unleashed a superb 18 yards strike that flew into the top corner to send the game to penalties. 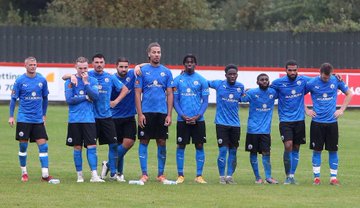