Billericay Women were well beaten in their first home match of the season against a strong Ipswich Women side. A strike from Paige Peake direct from a corner just before the break opened the scoring. Goals from Sophie Peskett and Maddie Biggs completed the score-line. 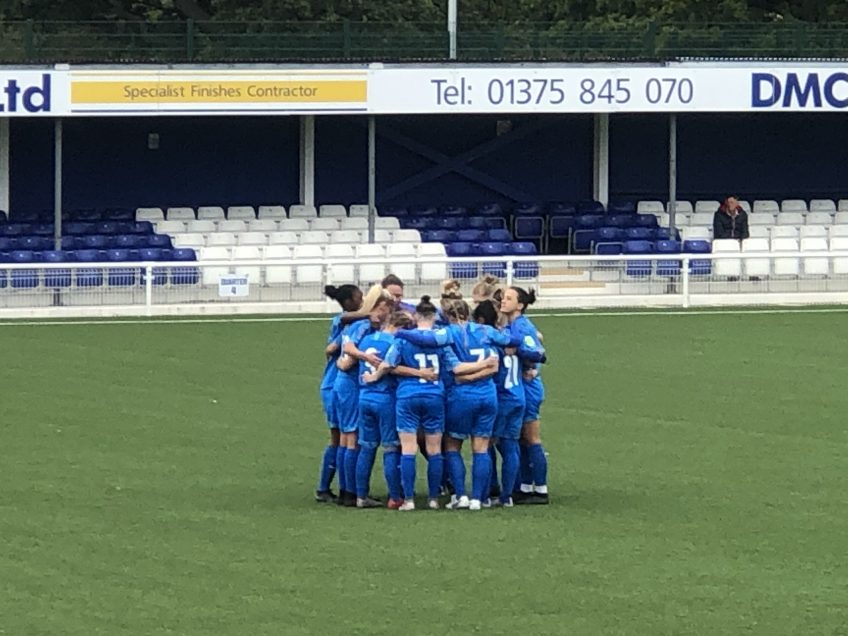 A keenly awaited match, Ipswich had set the pace in the division last season, topping the table before the pandemic intervened to force an early close. Billericay, marooned in 4th, but with sufficient games in hand to close the gap, had tracked the Tractor Girls all the way.

Having met only once in last season’s tightly contested 2-1 win for Ipswich in East Anglia, each side knew from previous acquaintance that a tough test lay ahead. Both, buoyed by victories on the opening day, had brought in new faces over the summer but, for the main part, have relied on a core of players that had served their respective clubs well to date.

A notable change was the presence of a new manager in the dugout. Billericay’s, Scott Chickelday, having taken up the baton during lockdown, faced the first big test of his tenure.

Switching to a back four, from the wing-back system employed in the win away at Cambridge City, Chickelday went for experience. Making two changes to the line-up, Courtney Lumley and Esme Lancaster came in for Robyn Moody and Freya Fuller.

Ipswich pressed forward from the start but foundered on several timely interventions from Billericay centre-back, Hannah Porter. The home side countered with an early break as a clever through ball from Kerry Stimson brought striker Zoe Rushen into the game. Out bravely, Ipswich goalkeeper, Lucy Williamson was able to smother the danger in time. 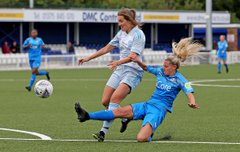 The home side’s tactical set-up was working well with the presence in central midfield of Stimson and Jay Blackie ensuring that Billericay more than held their own in an even first half. Winning a number of free kicks at around the thirty yards mark, home midfielder Therese Addison failed to capitalise with several efforts flying well over the bar.

Peake, who can deliver a ball with pinpoint accuracy, was needed to bypass the home stranglehold with a searching pass through to the lively right winger, Peskett. A player, who caught the eye, especially in the second half, a shot at Alex Baker from an angle was saved. On a rare concession of possession in midfield, Ipswich’s Abbie Lafayette smashed high over the bar.

With the match often resembling a tight, cagey contest between two well-matched sides, the lack of goalmouth excitement became a notable feature of the first half. Any entertainment had to be provided by referee, Tony Bickley, who pulled up clutching a hamstring. After a brief interruption to play, a spot of magic spray, and an encouraging word from the home physio, seemed to steady his resolve and he made it through the game. 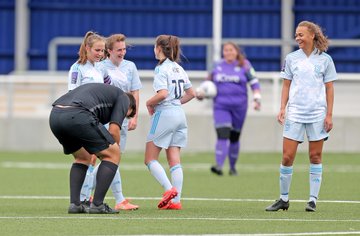 With Rushen a little isolated on her own up front, and lacking support from breaking midfield runners, Billericay’s best opportunities came from the familiar set piece route. A free kick wide on the right for a foul on Blackie saw Teni Charles go close with a header that was deflected over the bar. From the corner, Porter jumped well to rise above everyone to nod an effort wide of the far post. 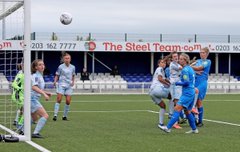 Hannah Porter goes close for a Billericay Women with a header from a corner. Photo Courtesy: @nickyhayesphoto

With half time approaching, Ipswich took the lead as Peake’s corner from the right side passed over Baker and went in. Whilst the temptation is there to call it a freak, wind-assisted goal, Peake has previous experience of the feat. Netting for Ipswich in the previous meeting last year from the same method, she deserves credit for having the technique to exploit the conditions.

Paige Peake celebrates her opener for Ipswich on the stroke of half time. Photo Courtesy: @nickyhayesphoto

But for Blackie, it could soon have been worse. A midfield combination saw Peskett ‘s ball through release Natasha Thomas who profited from a Danica Dougal miskick to run clear. Arriving at the last moment, Blackie whipped the ball away with perfect timing as the striker was poised to shoot.

After a creditable first half during which Billericay competed head to head with Ipswich as equals and looked every inch a top side, it all went wrong after the interval. It may have been the hammer blow of the timing of the first goal, the impact of the departure of the injured Rushen, the Ipswich tactical changes at the break, or a combination of all three.

Ipswich, who had welcomed back six squad members from England duty earlier in the month, brought on star summer signing, and former England U-21, Georgia Allen. Still only 22 years old, and, back after four years playing at college in the United States, her quality and influence in a central midfield role helped to regain the initiative in a key area.

Peake, stepping up from defence, arrowed a ball into the channel for the scampering Peskett. Benefiting from being shifted inside after the break, she broke through but could only find the legs of the advancing Baker. Billericay responded through Charles who pinched the ball from left back, Eve Hubbard, but could only fire wide of the far post from range.

The home side visibly tired and Ipswich started to exert their authority as Allen and Peskett took advantage of the extra space. The two combined just past the hour to secure the vital second goal. Allen’s through ball bisected the Billericay defence and, with two Ipswich forwards converging on the ball, Peskett won the race to nudge past the helpless Baker.

Ipswich, who started six players sourced from Essex RTC (Regional Talent Club), soon added a seventh as striker, Maddie Biggs entered in place of Thomas. Quick, two-footed, and direct, after just two minutes on the pitch she touched home a superb Peskett cross past Baker for Ipswich’s third. As in the case of the influential Allen, the impact of Ipswich subs contrasted with those of Billericay who did not enjoy a similar profile when called upon.

Ipswich surged forward and the home side were unable to prevent further, persistent breaches as the visitors ran riot creating chance after chance. With the disciplined pressing of the ball carrier seen in the first half less apparent, a series of long passes from Ipswich defenders caused problems.

First, Biggs smashed Hubbard’s pass against the post and hit the rebound wide. One minute later, Peake sent Allen through only to draw a smart save from Baker diving to her left. The Billericay defence, which performed well as a back line despite the score line, held firm even if a Biggs effort tested their resolve as it rattled the cross bar and drifted to safety.

With little headway made against a disciplined Ipswich defence in the second half, Billericay’s attacking moments were limited to Freya Fuller’s volley at Williamson and a cushioned side-foot strike from Blackie after good work from Moody made room for a cross. Fittingly, Ipswich had the final word with a late Lafayette hooked effort that struck the bar.

Billericay can reflect that they came up against a very good side and were well beaten in the end. A good game plan that worked in the first period cannot disguise that the visitors are further ahead in the pathway development process. A young side, packed with England age group internationals, Ipswich will take some stopping from winning the title this year.

The Essex side Now lie 6th but are good enough to beat most opponents this campaign and should not be too disheartened by the loss. Focus must now be on getting the right result in another demanding home match this Wednesday at rivals, Hashtag United, and getting back on track.