When you leave, don’t take the beach with you!


You have been warned! 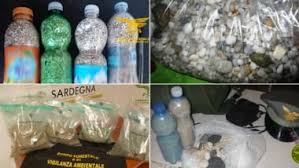 A French tourist to Italy has just been fined €1000 (£890) for stealing sand from a beach in Sardinia.

After uncovering a bottle full of stones, local authorities recovered around 2Kg sand from their luggage as they tried to fly out of the country.

It seems that the white sands of the island are considered to be extremely precious and are protected.

“Sandy beaches are one of the main attractions of Sardinia. There are two threats: one is due to erosion, which is partly natural and partly induced by the increasing sea level due to climate change; the second is sand stealing by tourists.

The problem reached such levels back in 1994 that access to the famous pink beach on Budelli island to the north-east of Sardinia was banned as authorities feared for its future.

And the problem continues to this day, with tourists, mainly from other parts of Europe, attempting to take the island’s precious sand and pebbles to sell.

Being a Tuesday, Margaret Mills took us back to the Essex village of GREAT BARDFIELD for a second week.

And this week’s item concerned a somewhat tenuous link to the 1950’s cult comedy radio programme – THE GOON SHOW.  Just how tenuous you can find out by listening again here: –