Written by Paul Golder in In The Papers👁 300 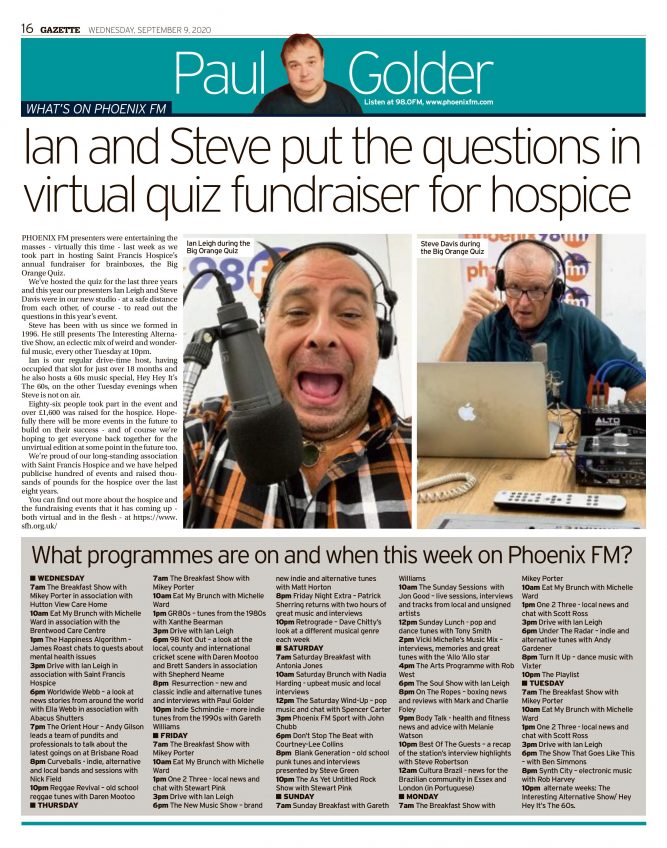 We’ve hosted the quiz for the last three years and this year our presenters Ian Leigh and Steve Davis were in our new studio – at a safe distance from each other, of course! – to read out the questions in this year’s event.

Steve has been with us since we formed in 1996. He still presents The Interesting Alternative Show, an eclectic mix of weird and wonderful music, every other Tuesday at 10pm.

Ian is our regular Drive time host, having occupied that slot for just over 18 months and he also hosts a 60s music special, Hey Hey It’s The 60s, on the other Tuesday evenings when Steve is not on air.

86 people took part in the event and over £1,600 was raised for the hospice. Hopefully there will be more events in the future to build on their success – and of course we’re hoping to get everyone back together for the unvirtual edition at some point in the future too.

We’re proud of our long-standing association with Saint Francis Hospice and we have helped publicise hundred of events and raised thousands of pounds for the hospice over the last 8 years.

You can find out more about the hospice and the fundraising events they have coming up – both virtual and in the flesh – at https://www.sfh.org.uk/