Billericay maintained their impressive pre-season form with victory at New Lodge over National League, Boreham Wood. Ronnie Henry and Ruben Soares Junior made the difference with headed goals in each half in a match played at full throttle.

The match-up with the Hertfordshire outfit was a clear step up in the quality of opposition for Jamie O’Hara’s side. Remaining undefeated in the warm-up matches, the Blues met opposition that had been good enough to make the play-off semi-finals in July.

Extended involvement in the previous season seems to have been a temporary disadvantage for the Wood in the early stages of preparation for the new campaign. Late to return to training, the first friendly away at Isthmian Premier side, Wingate & Finchley, had yielded a rusty, uninspiring performance, marked by individual errors in a 3-2 defeat.

For the home side, preparation appears to be advancing satisfactorily. Pre-match announcements that former trialists, left back, Chevron McLean and striker, Soares Junior, had signed contracts was just reward for two players that have regularly caught the eye. Both fully justified their new contracts with excellent performances against top tier National League opposition.

The visitors tore at the Blues straight from the kick-off, having the better of the early exchanges. The increased pace of the game driven by the quality of the opponents was clear to see and it is testimony to the home side’s development that they weathered the storm.

McClean, a new addition to the Billericay squad, impressed during the match as Wood poured forward to apply pressure. Also finding time to support attacks, he played the whole match and looked the solution to the club’s hitherto problematic left back position.

Admittedly, there were early errors from the National South side as possession time was limited by an aggressive press and several passes went astray. Blues midfielder, Joe Felix, has made notable contributions in previous outings but tonight needed to show his defensive abilities. As soon as the first minute, he dashed back, hooking the ball clear, to deny the equally diminutive, Piero Mingoia, from breaking through the defensive lines.

Mingoia, a veteran of League Two in spells at the likes of Accrington Stanley and Morecambe, was at the hub of the National League side’s attacking threat. Operating in pockets of space, located just behind the front two of Matt Rhead and Kabongo Tshimanga, he caused the Billericay defence frequent problems with his clever movement.

That he did not get his name on the scoresheet at New Lodge once more was down to a smart block from the Blues triallist goalkeeper, Dion-Curtis Henry. Looking to emulate the goal he scored in the 2-1 friendly win against Harry Wheeler’s side last July, Mingoia profited from a through ball provided by Dave Stephens. Clear of the Billericay defence, his shot found only the legs of the Blues custodian who had been quick to close the angle.

While Boreham Wood had confounded expectation by selecting a back four instead of the usual wing back formation, there were no surprises from the return of Rhead. Briefly at Billericay, an expensive acquisition made by the previous owner in the last vestiges of his regime, the former Lincoln City striker had never really integrated into Billericay’s structure.

Now, at 36, enjoying the twilight of a long career, the burly centre-forward has settled in well at his new club since he joined in February and is part of manager Luke Garrard’s plans. Prominent from the start, his well-documented aerial power was used to good effect to nod the ball into dangerous areas as Nathan Ashmore’s goal-kicks zeroed in on his forehead.

The Blues own target man, Josh Hutchinson, tried manfully to provide a fulcrum for the home side but initially found it difficult to break free from the defensive attentions of Stephens. Growing into the game, both he and Henry went close on twenty minutes. First, the defender controlled well on his chest, hitting a rising volley over the bar. Next, after being freed by McClean, Hutchinson sent a fierce shot too high to worry Ashmore.

Billericay have recruited well this pre-season and Luke Wanadio, an acquisition from Dartford, has shown bursts of talent on the left wing each time he has featured. Last night was no exception, as he readily picked up possession and demonstrated his close control. Forcing physical defenders to turn and deal with pace, he was soon pulled down just outside the penalty area.

It would prove to be a costly indiscretion as Billericay took the lead on the half hour. Another new arrival, central midfielder, Frankie Sutherland stepped up to take the resulting free kick. Sending his curling effort up and around the wall, Ashmore pulled off an outstanding stop to tip the ball onto the crossbar. His defensive cover was less impressive, staying immobile while Henry waltzed through to apply the close range headed finish. 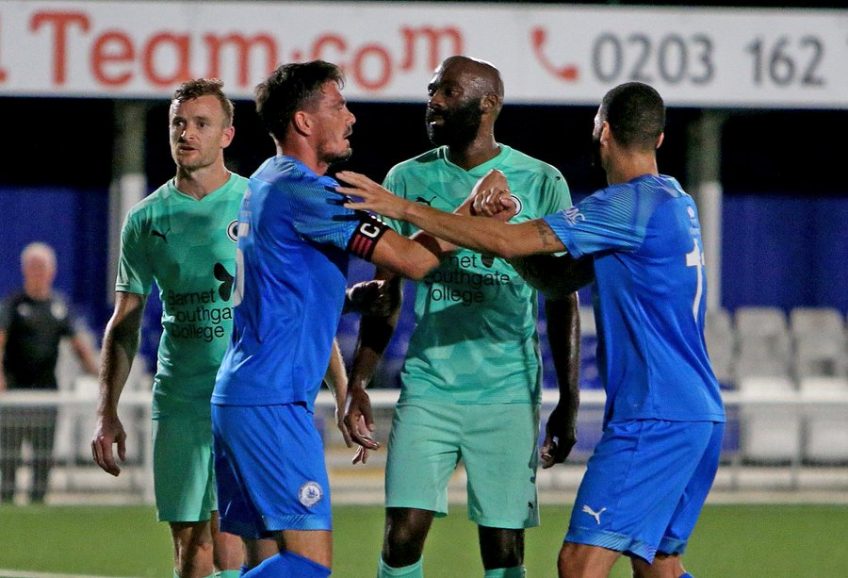 Half time substitutions were reasonably restrained for a pre-season game at three for Billericay and two for Wood. Despite the addition of fresh faces, the pace remained frenetic. Tshimanga worked goalkeeper Henry twice with strikes in a matter of minutes and the visitors racked up the corner count. Chambers defended well and one intervention, to deny Rhead space to head a cross home at the far post, showed promising defensive acumen.

Wood kept pushing forward and spurned a golden chance to equalise from yet another corner. The guilty man was Kieran Murtagh who placed a free header over the bar from close-range. Still the Blues held out. Turning defence into attack, the lively, Soares Junior was a considerable asset. A quick break sounded a warning to the Wood as the attacker showed his pace and dribbling skills down the right side to move the ball up the pitch. He would repeat the trick on several occasions and, sourced from step four, he is quite a find.

With two committed sides, the inevitable flashpoint arrived as Felix displeased substitute Sorba Thomas with a strong challenge. The pint-sized Billericay dynamo earned a booking for the foul. The officials took the view that a stern word with Thomas was sufficient after a brief flare-up. The subsequent Corey Whitely free kick from the left almost brought quick reward. Sailing over Henry, the curling effort crashed against the angle of crossbar and post.

Suitably chastened, Billericay streamed upfield and closed out the game on sixty-six minutes through Soares Junior. After initially drawing a fine save from Ashmore with a diving header, within moments, the Blues new marksman was on hand to finish a deep cross from Felix. This time, Ashmore was helpless as the flicked header found the top corner for the second. 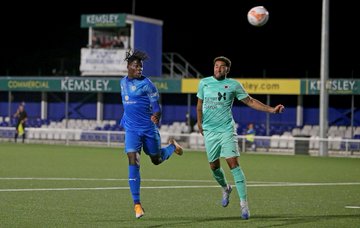 With the remainder of the game disrupted by the use of numerous substitutes, there was time for cameos from Billericay trialist Hani Berchiche, who showed some nice touches on the left side. Equally, Yannis Drais, another trialist pushed forward well from his midfield berth. Wood also used the latter part of the match to provide further first team minutes for the club’s academy graduates Ellis Brown and Frankie Taylor, both aged 17.

A competitive match throughout, O’Hara will reflect on a pleasing performance, full of character, against the best opposition faced so far in preparation matches. Whilst the opposition may be behind the Blues in terms of match readiness, there were long spells when the home side came under relentless pressure but held out. To its credit, the defence, not always known for its solidity, stood up well to Wood’s physical threat and aerial power.

With new forward additions, Soares Junior and Wanadio standing out, the Blues had their own potent weapons to strike back at the opposition and offer encouragement that the right blend is putting put together. A win in a friendly is positive but still only a limited guide as to how the season will progress. What is more certain is that the squad is coming together, there are some fine new squad additions, and prospects are improving.