Just what you’ve always wanted – a souped up wheelbarrow


So we learnt today that the man who created the world’s fastest shed which achieved speeds of 100MPH on a Welsh beach in 2018, has now come up with a souped up wheelbarrow to go in it. 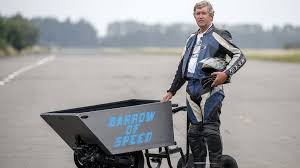 Powered by a moped engine, his so-called “BARROW OF SPEED” achieved a speed of 44MPH at a Straightliners Event at Elvington Airport near Leeds.

But now inventor driver, 55-year old KEVIN NICKS believes he can make it go even faster.

After completing his latest outing, Mr Nicks said, ‘It’s the most bizarre thing ever to ride – the handles of the wheelbarrow move in all directions.”

“Every journey on it is not just going fast in a straight line, you’re trying to avoid crashing, which is great! The adrenaline rush is unbelievable.”

But if he wants to get the speed of the shed in the Guinness Book of Records, he’s going to have to do it for a second time.

Mr Nicks says he started building the super speedy wheelbarrow shortly after the country went into lockdown to inspire others to be creative and distract them from bad news surrounding the pandemic. ‘I can’t change the world but what I can do is try to make it better for some people,’ he said. ‘For me, it’s rewarding to see the smiles on people’s faces.’

Asked what he plans to add to his collection of inventions next, Mr Nicks said: ‘Oh I have plans – my next build is really bonkers. Not hugely fast, but bonkers.’

He’s already made a smaller version of the Fastest Shed, called Freddy the Sheddy, for children, and has also published a children’s book.

In the second hour of today’s programme, we heard from Margaret Mills about a Methodist Minister from Rayleigh – and a suffragette.

And no it’s not a joke and neither is the Methodist Minister’s name, although NEHEMIAH CURNOCK is certainly a name to conjure with!

Meanwhile the suffragette involved is thought to be his daughter who it is alleged, threw a brick through the local post office window.

Listen again here to all the gristly details  as revealed by Margaret: –