Times are changing at Brentwood Town. Exciting summer signings, a renowned Non-League manager in the hot seat, investment in the pitch and stadium, and a three-year strategy plan to boot.

With upward mobility the watchword, it’s no surprise that promotion from the Isthmian North features heavily in the near-term plans of this newly ambitious Essex club. 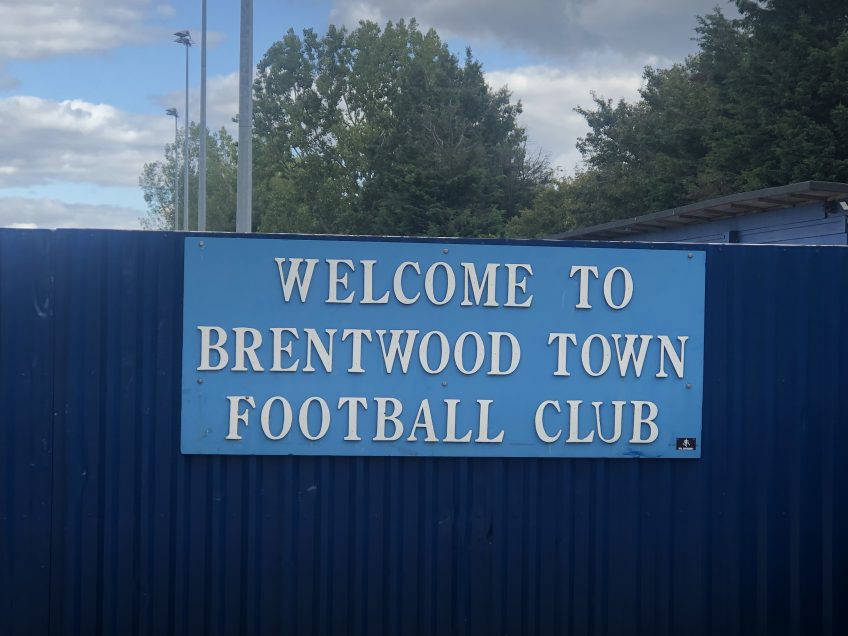 Located in prime Essex commuter belt, if we ever do return to the office, Brentwood, or “The Blues”, as they are nick-named, have meandered along in the middle reaches of semi-professional football without attracting too much attention from the outside world. Notable footnotes include an FA Cup third round tie back in 1969-70, and the treble year of 2006/7.

Winning the Essex Senior League (ESL) saw Town start the 2007/08 season In the Isthmian North at Step Four in the pyramid. For the most part, that is where the club has stayed with the exception of promotion in 2014/15 that led to a single campaign in the Isthmian Premier before swift relegation and reversion to the mean.

If Chairman, Jez Dickinson, gets his way, the next ten years for Brentwood will look very different from the last. An Essex-based businessman, who took control last year, he is the man behind ROL Cruise Ltd, a cruise broker in Colchester. Whilst one might assume that the industry could be sailing in choppy waters, ROL is doing well enough to donate over £100k in support of NHS charities across Essex since the onset of the pandemic.

Whilst football can throw up the scenario of the monied businessman looking for an outside interest to raise his own profile, this does not appear to be the case here. Dickinson comes across as a genuine fan who wants the best for his team.

His association with the club is a long-standing one rather than being forged solely by a successful business meeting.  His son, midfielder, Jack Dickinson, has been in the Brentwood system for some time and is on the fringe of the first team, as he explains:

“I got involved (at the club) predominantly because my son played with Brentwood Youth all the way through from the U-13’s to where he is now. He’s 18 now. “The main reason I’ve been involved since then – 6 or 7 years ago – you felt that there was so much more you could do with the club. An opportunity came up at the start of June last year.”

That opportunity saw Dickinson assume ownership of Brentwood Town as he was installed as Chairman in May 2019. He succeeded previous incumbent, Brian Hallett, who had been associated with the club for the past 23 years. At the helm, the new man has understandably brought his own ideas to refresh the main areas that required attention.

“My interest was for the club to do well but I knew the first season (i.e. 19/20) would be bedding down some infrastructure changes, with personnel, and, materially, with the clubhouse. I needed to change the manager after about four or five months. I waited another month or so and brought Adam (Flanagan) in at the end of January.”

Flirting with relegation last season, Brentwood finished a lowly 17th and just three points clear of bottom side, Basildon United. Whatever the team achieve in the coming campaign, the calibre of signings announced over the summer period should ensure that Blues supporters are scanning the top part of the table rather than the lower reaches.

With first new recruit, ex-Billericay Town centre-back, Rob Swaine, 32, arriving from National South side, Welling, a marker was laid down that Brentwood meant business this time round. Headline, “one-off” signings are all well and good but the acquisition of Brentwood-based, Swaine, has proved to be part of a wider strategy. Eight further new players followed, with ex-Ebbsfleet and Dulwich Hamlet goalkeeper, Preston Edwards, 30, the most well-known.

Overall, recruitment has been well thought out and clearly constructed with a tilt at promotion in mind. Players such as ex-Brightlingsea Regent quartet, Jake Gould, Matt Cripps, James Love, and Rob Harvey all are comfortable operating at a higher level. Striker, Adam Vyse, who netted 14 times last season for basement side, Basildon, has experience and knowhow of the level and should provide a strong focal point in a physical division.

Dickinson acknowledges that success, if it is achieved, will be down to paying attention to all aspects of the club and ensuring that all involved buy into, and contribute to, achieving a shared vision for the future. Changes are already afoot, with areas of the stadium repaired and repainted, significant funds spent on a previously troublesome grass pitch, and a gleaming, new clubhouse. More than one specific action, a shared collective culture of responsibility, and professionalism across all club matters is being installed.

Setting manager, Adam Flanagan, the task of achieving two promotions in three years to reach the National South looks a tall order but Dickinson is convinced that Brentwood should think big.

As he outlines, “It’s a plan of where we want to be in one to three years, starting now. It takes time but we’re looking for promotion this year. If we don’t, we’ll be disappointed because we’re doing everything to be National South quality on and off the pitch from now rather than waiting”.

Walking into the club on matchday, it is clear that there is renewed ambition and indications are that the early stages of revival are definitely there. Whether it is overhearing club coaches discuss the new VEO camera system, installed to film players and run analysis, the casting of an eye over a now pristine playing surface, or smelling the hot coffee being prepared in the bar area of a sizeable new clubhouse, every sense tingles in anticipation at what a new season might bring.

With the focus last campaign on getting the infrastructure built, Dickinson is expecting a successful team to help drive up average supporter numbers beyond 140-150 last year.

With success on the pitch would come the need for stadium development. With Brentwood Borough Council unveiling a two-phase leisure strategy earlier this year that will include substantial investment in creating additional sport facilities, the football club look to have a potential common interest. There have been discussions, which will include the installation of a 3G playing surface at the club, as Dickinson reveals:

“We’re both speaking together about creating a proper football hub within the Brentwood centre area and, obviously staying in the area, pitches out the back. We’re looking for a 3G pitch for next season so we’re working with the council on that. We’re also looking for another one or two pitches as well. Regarding the stadium-wise, I think, yes, we did speak about having a new stadium, which we would move, but that would be down the line.”

Artificial pitches in non-league are increasingly common, with National South neighbours Billericay Town installing their 3G surface over the summer. With almost constant use, the community impact is clear to see as more and more people have a reason to visit and connections are made.

Dickinson has plans to construct a pathway to the first team by building up the youth section of the club and sees a new all-weather pitch as a potential game-changer. Plans are also in motion to speak to the Brentwood Ladies team, who play home matches in Southend, to consider coming back and playing locally at the club’s facilities in the future.

“The pitch would make a big difference, actually a 3G pitch. That would bring different dimensions for the club and that’s really the first objective”. He adds, “Working with the Council, and therefore the community, is actually, by having the 3G pitch, the start of a football hub where we’ll create a “football cabinet” which brings revenue, interest, and footfall through to the club.”

With a young team taking the field for the final friendly played on Saturday ending in a narrow 1-0 defeat to Isthmian South East side, Cray Valley Paper Mills FC, the competitive action starts next Saturday (September 12th) with a trip to FC Romania in the FA Cup.

Dickinson must now leave it to the experts in their field to get the right result. He feels that, “We’ve prepared well and we’ve got an experienced side, a good blend, and we need to win tough games throughout the season.” He hopes for a good start and is “confident but not over-confident” for the campaign ahead.

There will be no crossing boundaries and Dickinson insists he’ll never move into the dugout and try his hand as the manager. He closes by stating, “I’ve got 100% confidence in Adam. I understand football but it’s all about delegation and Adam’s running the team. “He’s a winner so I know he’s going to be successful.”

With fans allowed to enter all Brentwood Town matches, there’s never been a better chance to see your local side in action at the Brentwood Arena.