In tonight’s Orient Hour, host Andy Gilson is joined in the studio by Stuart Minchin and ex-O (Ooh) Terry Howard and on the telephone by another ex-O Danny Carter.

As well as discussing all things Leyton Orient this week, Terry and Danny reminisce about their time at the O’s. David Triggs of Bury AFC calls in talk with the Panel about how things are working out for those involved at the phoenix club – a position we so very nearly found ourselves in! 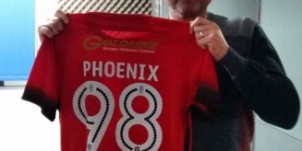