With pre-season training beginning on August 11th for the Billericay Town squad, we run the rule over the squad assembled so far for the 2019/20 season and look at every new signing.

With more new arrivals expected, the analysis is clearly incomplete until the final deal has been inked. Nevertheless, we could not resist commenting on the considerable progress.

From the hires already undertaken, a clear picture of the potential first team is emerging, which looks competitive. The extent of the adverse impact of COVID-19 on club budgets is not fully known although in many cases it is likely to constrain recruitment plans.

With football authorities persisting with what looks to be an overly cautious outlook on match attendance at non-league level, vital income for clubs has been severely curtailed, leaving tough choices.

Recruitment at Billericay Town moved into top gear this week as new signings, including yesterday’s announcement of Michael Chambers, now total eight. Factoring in four retained players from the last campaign, the framework for Jamie O’Hara’s new squad is beginning to be traced out.

Although the retained players are all over 30 years old, new recruits have been better balanced. Of the eight signed, one, is over 30, one is 30, and the remaining six are arguably in their prime at either 26 or 27. 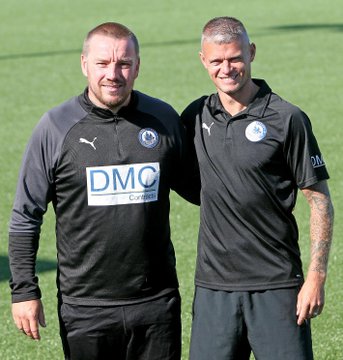 it is no surprise that major renovation of the defence is underway after an alarming tendency last campaign to concede late strikes. Looking leaky away from home, with over two goals per game conceded, a regularly patched up back-line lacked the security needed to stay the course.

Lamenting the lack of height in his central defence, particularly after lanky Dorking striker, Jason Prior, secured a point with a late header at New Lodge last September, O’Hara has fully compensated for any lack of inches with the arrival of two giants to police the defence.

The return of Chambers is, in my view, a hugely important acquisition, which should help make the Blues a tougher side to break down than had been the case at times last year. 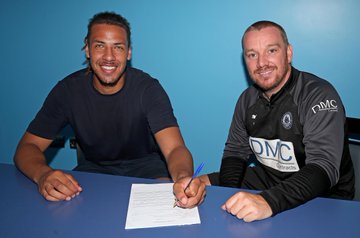 Michael Chambers signs in the dotted line for Billericay Town for the 2019/20 season. Photo Courtesy: @nickyhayesphoto

Still with something to prove, after a disappointing season in Kent, Knight only made eight starts after a shaky beginning to his career at the Gallagher. Two previous successful campaigns at St Albans and Concord Rangers hint at a better player than was seen at Maidstone. A right-sided central defender, his year at St. Albans in a dedicated 3-5-2 provides O’Hara with a player well used to the demands of playing in a defensive three. The calm influence of Chambers and authority of Ronnie Henry should aid his integration. 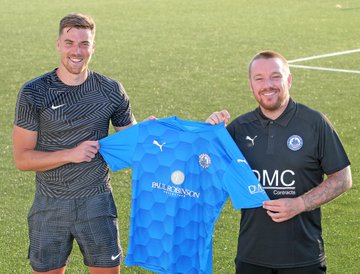 The full-back positions have tended to conjure up something of a conundrum for the Blues. In particular, high standards set at right-back by Joe Kizzi, departed for Bromley in May 2019, have not been equalled.

Whether current recruiting requirements are for a full-back, a wing-back, or somebody who is expected to function well in either role, is not clear. With O’Hara’s brand of football reliant on the fast, attacking full-back, the flanks are key areas.

Last season as Billericay rattled through almost every tactical set-up employed in football, we saw the right flank covered by a combination of the specialist traditional full-back, in Ben Nunn. On occasion, this evolved into converting winger, Louis Ramsey, into a makeshift wing-back.

The idea was a good one, bringing pace and youth to a demanding physical role. Somehow, neither player worked out as the flank proved to be a vulnerable area for a time as opposition exploited space vacated behind the full-back’s.

The best option in the role turned out to be the “old stager”, Ronnie Henry, who added more defensive solidity. A right-back throughout his long career, he had been brought to Essex to operate as a centre-back. Switched wide, he was very reliable as a conventional full-back.

Energetic enough to gallop down the flank when required, the skipper belied his advancing years to also make passable cameos as a marauding wing-back.

With Henry still at the club, highly influential both on and off the field, and showing to date that he can operate across defensive roles, O’Hara is furnished with several options.

Nonetheless, with the benefit of a squad renewal, and a potential desire to have the flexibility to operate a wing back set-up on a regular basis, it is a lot to ask a 36 years old player to undertake the most physically demanding position in the team each week.

By contrast, former Ebbsfleet United defender, Lawrie Wilson, a mere stripling by comparison at 33 next month, is next man off the rank to take on the right-back role. A traditional full-back, he can also operate as a wing-back.

Whilst pace is not his forte, he should be able to deliver a quality cross. In his five years at Stevenage under the captaincy of Henry, Wilson played as a right winger in front of the Blues skipper. 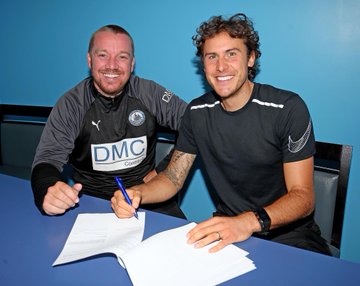 With Wilson previously operating at no lower than National League, and good enough to play 96 times in the Championship for Charlton Athletic, O’Hara looks to have opted for known quality and pedigree with this signing.

Converted to right-back during the 15/16 season at the Addicks, he embarked on a very successful career change. Two years at Bolton Wanderers in League One followed before a spell at Port Vale and on to Stonebridge Road.

After the departure of left-back, Callum Kennedy, the “situations vacant” sign is firmly aloft in this particular area. A traditional wing-back, his dead ball delivery and crossing were outstanding.

On the flip side, there were notable frailties in his defensive play, which could, on occasion, see speedy wingers find a pathway to the Blues by-line. Now off to Dorking, a team dedicated to 3-5-2, he finds a natural home and should thrive in that formation.

In the absence of Kennedy, Watford loanee, Harry Hudson, a central defender, was drafted into the left-back role. At only 19, he had the energy to cover the length of the pitch and acquitted himself well there.

Having been an area uncovered by a specialist for some time, this is a key area of recruitment. Getting the balance between a solid defensive option, and somebody that can get forward quickly, is all important. Did we mention dead ball delivery too?

With only Doug Loft retained to cover midfield, heavy recruitment was anticipated in this area. The first signing of the summer brought in the experience of central midfielder, Jai Reason, 30, after two seasons at Dover Athletic.

In a side badly shorn of creativity after the departure of Sam Deering last November to National league, Dagenham, Reason has the ability to provide the final pass from his midfield berth or operate forward in a No.10 role. 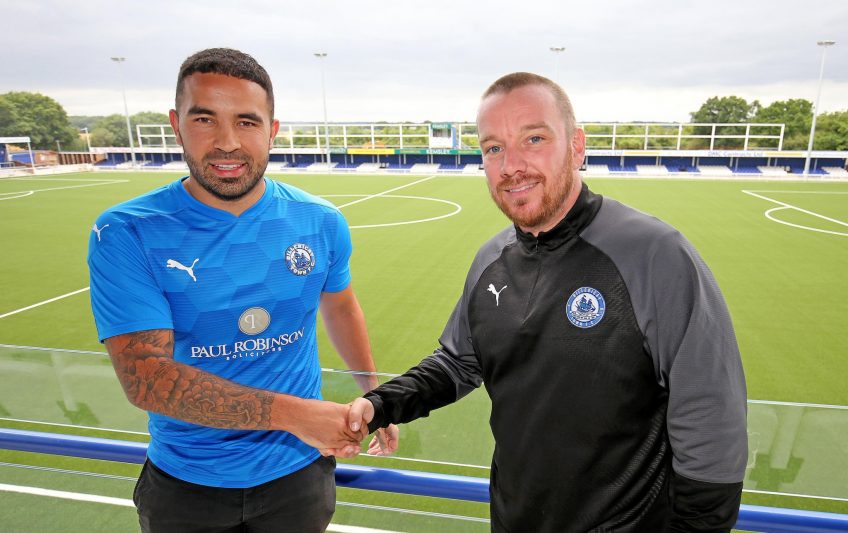 With a reputation for being “vulnerable in transition”, Billericay have beefed up the midfield engine room. In comes former Ebbsfleet central midfielder, Frankie Sutherland, 26.

An established National league operator, a single season in Kent followed two successful campaigns with Bromley. A powerful shot from range, Sutherland has a reputation for spectacular strikes, netting 11 times in 74 appearances in South East London. A tough tackler, he accumulated nine yellow cards in 30 appearances at the Fleet. 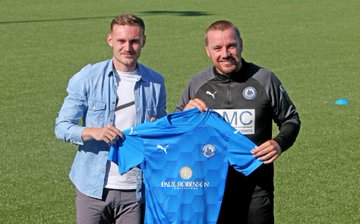 In the forward positions, the Blues premium goal-getter, Jake Robinson, with 14 League strikes in a shortened last campaign, remains at the club. Billericay’s recruitment to help share the striking burden after the departure of Femi Akinwande brings in three new faces so far.

Of these, one makes the step up from the League below, another is from a divisional rival, while the third hire is a promising player stepping down from the League above.

A former Billericay U-23 player, he made several appearances for the Blues from the bench during the 2012/13 National South campaign under Craig Edwards. He subsequently departed to Potters Bar in June 2013. 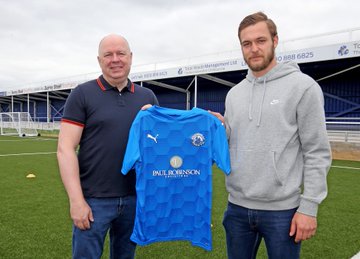 Josh Hutchinson returns to Billericay Town and is welcomed back by co-owner, Greg Lake. Photo: @nickyhayesphoto

New arrivals, Luke Wanadio, 27, from Dartford and Shamir Fenelon, 26, from National League, Maidenhead are proven performers at this level. Both have good assist and goal scoring records.

Wanadio largely operated within an attacking 4-3-3 at Dartford under Steve King. Active on both flanks, he has been particularly effective on the left side, cutting in to shoot with his right foot. Fenelon operated as an attacking midfielder, stationed wide on the right, within a defensive 4-5-1 favoured by Alan Devonshire’s Maidstone side.

Wanadio, an old-fashioned wide-man with searing pace, gave the Blues back-line a torrid time on their last visit to Princes Park and joins amid much competition for his signature. Right-sided but comfortable on either wing, successful seasons at both Dartford and Bromley established his reputation.

His return to Dartford for 2019/20 brought five League goals, a late strike from the bench in the play-off semi-finals at Havant, and many assists. 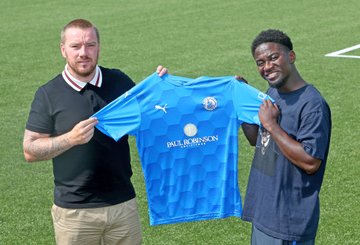 Fenelon may not be well known but he could prove to be the best acquisition of all in this writer’s opinion. A product of the Brighton academy, he started his career at League Two Crawley Town. A three years spell at Aldershot Town, in which he reached the play-off’s twice, was successful until an injury disrupted final year.

Last season at Maidenhead saw him make useful contributions whenever utilised although not always a first team regular.

Fenelon is right-sided but can operate on either flank. His speed, finishing prowess, and willingness to run in behind make him capable of getting on the scoresheet. Possessing a powerful shot, he has a reputation for netting spectacular efforts.

An exciting prospect to add to the team, this Republic of Ireland U-21 international brings extra attacking threat. 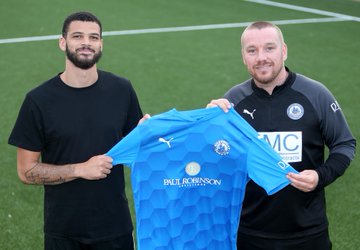 Looking at the arrivals as a whole, the squad appears to be building nicely. Seeking to pick an anticipated favoured formation, or style of play, is always tricky with more pieces in the puzzle to be accumulated.

Based on the players recruited so far, which includes a conventional full-back, two huge centre-backs, and two attacking wide-men, the manager has flexibility to look at 3-4-3, 4-3-3, or even 4-2-3-1 so most options look open to O’Hara.

It will be welcome to end the frustrating wait for live football and see for ourselves what Mr O’Hara has in store for us. Thankfully, the days of the “big gun” signing appear destined for the past, which is not something to be lamented.

This does not mean that the incoming players will be any less important for the club though. The club’s clever hiring, which takes in a mix of player profiles across the age and experience range looks to be the right way forward.