On today’s programme we heard about the man who was turned away from a DRIVE-THRU KFC , when he turned up with a horse and cart. 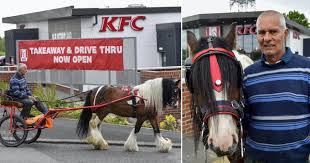 After queuing for some time, Ian Bell 55, finally reached the kiosk window, only to be turned away by the manager on the grounds of “health and safety”.

Mr Bell subsequently pointed out that horses had been around long before cars and claimed that his jalopy, a 7-year old Irish Cob, called JON JON is as good as gold.

Denied his Bargain Bucket, Ian then headed to McDonalds, who had non such qualms, and served him with a Big Mac without batting an eyelid.

He is now planning to try his luck at Burger King.

Being a Tuesday I was joined once more by Margaret Mills who told us what happened when Queen Victoria turned up in Epping Forest.

All she wanted was to sit quietly on a rug to scoff her sandwiches and crisps, but it proved a bit tricky due to size of her entourage accompanied by a brass band – well there were no portable radios and personal music players around then!

Well that’s not quite what happened for real, but you can listen to a more accurate account of the day here: –