A new, but definitely, not recommended, way of consuming fish!


Sometimes if in hospital, you may come across the instruction “NIL BY MOUTH” but that doesn’t mean you should try consuming food by any other means. 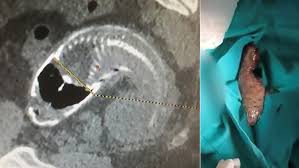 But from China comes news of a man taken to hospital with a fish stuck up his bottom.

Now if you can believe this, the patient claimed that he’d accidentally sat on the fish, although it’s unclear whether the creature was alive or dead at the time.

It took medics over an hour to remove the rather large fish, the spiny fins of which had caused the man’s intestine to rupture and resulted in surgeons having to open up his abdomen.

Perhaps he’ll be a bit more careful where he sits in future.

Meanwhile from India comes news of a man found with a two foot long phone charger in his bladder.

Well talking about matters medical, the subject chosen by Margaret Mills this afternoon, was that of an 18th century medical pioneer from Chelmsford, Dr Benjamin Pugh, who developed early inoculations and changed the perception of midwifery.

Listen again here to what Margaret had to say about this worthy gentleman: –

See you again once more next week,
Scott