TV Smith was founder member, singer and songwriter for the Adverts, who formed in late 1976, and became one of the leading bands in the first wave of British punk rock. In early 1977, they performed regularly at the newly-opened Roxy Club in London, and gained cult success with the Stiff Records single “One Chord Wonders.”

Their next release, “Gary Gilmore’s Eyes” became a hit record, leading to many radio and TV appearances including Top Of The Pops and extensive media interest. Follow up single was the anthemic “Safety In Numbers” which failed to chart but its successor,, “No Time To Be 21,” peaked at number 34, and the band spent the rest of the year playing live, including major tours with The Damned and Iggy Pop.

The album that followed in early 1978, “Crossing the Red Sea with the Adverts,” is still considered a genuine classic of the era and is often cited as one of the twenty best punk albums ever released.

The Adverts released one further album, “Cast Of Thousands,” before their split in 1979. Slammed by the critics at the time, the album was re-released on Fire Records to universal acclaim, and described by Mojo magazine as “the long lost punk album that rivals The Clash’s ‘London Calling’.”

Immediately after the break up, TV formed TV Smith’s Explorers, who achieved a U.K. hit in 1980 with the single “Tomahawk Cruise” and released one album, “Last Words Of The Great Explorer” a year later. However, a lack of commercial success led to the band being dropped by their record label and their subsequent split.

He has also been involved in a number of collaborations with other bands, most notably with German superstars Die Toten Hosen, who performed as TV’s backing band on the album “Useless.”

At the request of his fans, in 2013 TV released “The Acoustic Sessions,” an album of solo performances, recorded live in the studio with renowned producer Jon Caffery. Vive Le Rock magazine called it “an album that sits alongside the Angry Brigade output of Pete Townsend, Roger Waters and Lou Reed, but hits you with the wallop of bare knuckle punk.” Late 2014 saw the release of a new TV Smith album entitled “I Delete,” his sixteenth as a solo artist, which has been acclaimed by critics and fans alike.

Fiercely independent and determinedly embodying the original spirit of punk rock, TV continues to tour the world, bringing his epic solo show to ever-increasing audiences. Remarkably, he plays his concerts without a set list and every performance contains a different selection of songs chosen on the night. He plays more than 120 gigs a year and has performed all over Europe, as well as the USA, Japan, Australia, South America, Russia – and even Heligoland.

Not content with playing live, TV has also has written about his on-the-road experiences in five books of highly popular Tour Diaries, described by “Sandman” and “American Gods” author Neil Gaiman as, “hilarious, honest and incredibly true.” The fifth and final volume, “Book Of The Year,” contains a write-up of every one of the 130 gigs TV played in 2013. In 2016, TV’s first ever book of lyrics was published. Exquisitely designed by Cure designer Andy Vella, and entitled “The Alternative Top 50,” the book comprises fifty of what are arguably TV’s best lyrics. It is still available as a conventional paperback, with the foreword by former Black Flag vocalist, Henry Rollins. An exclusive collectors’ hardback edition which includes a 10’ vinyl single that TV recorded with Rollins is less easy to find.

A full-length BBC 4 documentary on TV Smith titled “We Who Wait: TV Smith & The Adverts” was first broadcast in 2012 and is still available for viewing on You Tube.

His most recent album is called “Land Of The Overdose” and was released in 2018.

The current COVID-19 pandemic has curtailed TV’s prolific gigging including a support slot on the cancelled Spring Stiff Little Fingers tour, which was also to have included The Professionals. Let’s hope that gets rescheduled..

Hopefully his support slot by invitation on selected Die Toten Hosen concerts in Germany and Switzerland will go ahead as planned in mid -June as most of these arena gigs have already sold out.

Check out www.tvsmith.com for latest news, gigs, videos and shop. 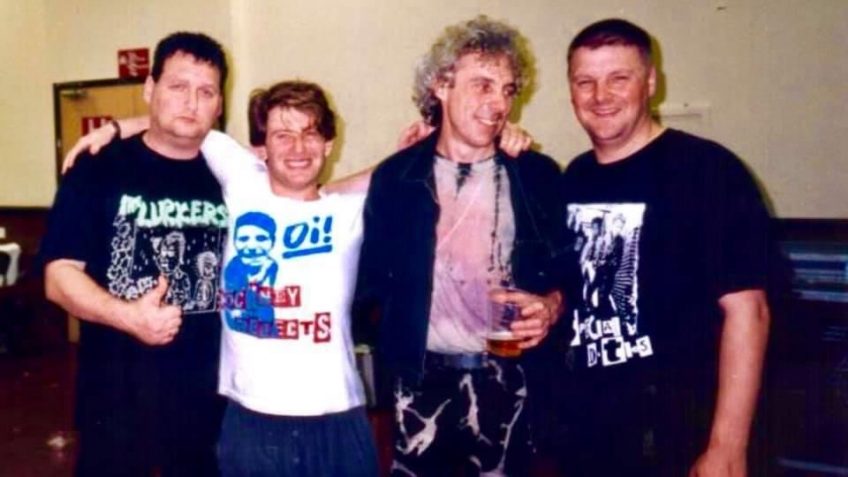