Ever gone to work not fully clothed? 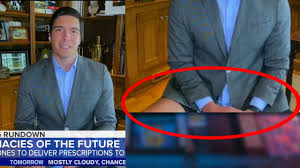 I imagine that many of us have turned up at work wearing odd shoes, or perhaps the jacket from one suit and the trousers from another but a TV reporter working for the ABC Television network  appeared minus his trousers!

Absolutely true – whilst working from home during lockdown US news reporter for GOOD MORNING AMERICA, Will Reeve appeared from home but without wearing any trousers.

The camera which had been set up by Mr Reeve himself revealed that although wearing a shirt and suit jacket, he was wearing nothing below his waist.

Mr Reeve blamed the mistake on a badly framed camera shot and joked that he would not be getting hired as a camera operator anytime soon.

“Trying to be efficient I got ready for a post GMA workout a little too soon this morning. The camera angle, along with friends, family and several hundred strangers on social media made me rethink my morning routine.

Any sartorial tips from these people who are wearing a belt, trousers and shoes during their work video calls at home are most welcome. Now, back to work. Wearing pants”, he said.

Being a Tuesday, in the second hour I was joined by Margaret Mills to look back at the life of Lady Olivia Sparrow, who was a major benefactor for the people of Leigh on Sea, although it is not known whether she actually ever lived in the town.