A new type of football strip!


We keep hearing that the Koreans have got COVID 19 licked and maybe they have but in their efforts to resume sporting events without real spectators, one club – FC SEOUL – has come a bit of a cropper.

Until recently they had been enjoying unparalleled success in having their matches screened in no less than 10 countries during the lockdown.

FC Seoul has been holding matches behind closed doors and using mannequins rather than real spectators to populate their stadium.

Unfortunately things went somewhat awry for last Sundays match at home to Gwangju when it emerged that the crowd seen to be enjoying the match were made up entirely of sex dolls.

The club admitted that although they had been assured that they were being supplied with normal clothing mannequins, they had failed to undertake any checking themselves and sincerely apologised for what happened.

Ironically it was the TV viewers who spotted the problem with one of them commenting that you had only to look at their breasts to see that they were 4 times bigger than normal!

Whilst some of the dolls had been dressed in club kit others wore T-Shirts with the logo of SoloS, a sex toy seller.

Other clubs in the country’s top division have tried different ways to fill the empty seats, such as self-portraits drawn by young fans or toy versions of club mascots, but clearly none has achieved the impact made by FC Seoul – and certainly none came close to the impact achieved by this match! 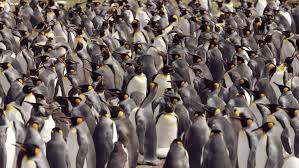 In the second hour of today’s show we asked you to spare a thought for scientists working with penguins who have apparently been suffering ill effects caused by the huge quantities of poo produced by the birds.

It seems that the levels of nitrous oxide, more commonly known as laughing gas, given off by the colony’s faeces was about 100 times higher than in a fertilised field and has proved enough to send someone “completely cuckoo”.

After nosing around for several hours, the scientists started to suffer severe headaches, feel generally unwell and start behaving erratically.

The nitrogen in the nitrous oxide produced by penguin poo comes from the seabird’s diet of fish and krill, on which they feast themselves from the phytoplankton in the ocean.

When these are excreted, soil bacteria convert the poo into nitrous oxide, which unfortunately is a greenhouse gas.

And if you are wondering just why the scientists are putting themselves through this experience, it seems that it helps them to discover the most effective and optimal conditions for using fertiliser in growing plants and food.

Oh well back to the drawing board, or perhaps they need to order thicker protective masks!