What’s in a name?


How do you chose the name of your child?

Some people name their offspring after their parents, some include a mother’s maiden name or other family monocle, or it might simply be that you like a name.

I ask this question because whatever name you chose, your child will have to live with that name, unless they want to have it changed by deed poll.

I recall meeting somebody who’s name was NICK KNOX, and someone else called JUSTIN LINE. Whether the parents thought it amusing, or just hadn’t considered the link between the chosen Christian name when linked to their surname, who knows. I also remember meeting someone whose parents had a love of westerns who’d name their son after a character in The High Chaparral, which when combined with their surname resulted in a chap with a name that sounded like an explosion – BLUE EARP.

But now from the US we learn that ELON MUSK and his partner “MUSICIAN GRIMES”, whose real name is Claire Elsie Boucher, have named their son using a series of letters and numbers. 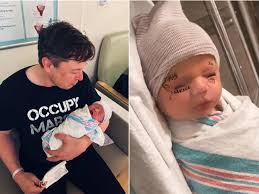 ‘X Æ A-12.’ The Æ is apparently the Elvin spelling of Ai for love and/or artificial intelligence.

The whole name is pronounced X ASH A 12.

Should be interesting calling him in for dinner, and quite how he’ll get on at school is worth pondering over.

However there could be a problem as under Californian law you are only allowed to use the 26 characters of the English language in naming a child, although technically they could turn the name into something that’s pronounced the same way, such as X EYE A TWELVE.

Well whether or not the child is stuck with the unpronounceable name, it seems that the infant is to be brought up as gender neutral so that it can make up it’s own mind to suit it’s own personality.

In the second hour of today’s show we took time out to look at the newly introduced “drive-in” strip club which has just been launched over in the USA. 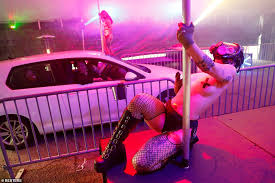 Yes, in order to sidestep the lockdown regulations, THE LUCKY DEVIL LOUNGE has turned itself into LUCKY DEVIL EATS, a “DRIVE THRU” establishment.

So now customers can place take-away food orders and when they turn up drive slowly through the lounge’s disco lit car park, where they are able to enjoy performances with flashing disco lights and music, whilst the dancers serve up the food as well.

What’s more customers are allowed to take photographs and videos of the experience so they can post them on their INSTAGRAM accounts etc, thereby generating some free advertising for the venue, no doubt.

Club owner, SHON BOULDEN said they were anxious to replicate some of the club’s regular indoor experience without being too lewd.

There’s no nudity involved, he added.

Well there wouldn’t be as the girls are all wearing surgical gloves and masks!