This afternoon I talked on the phone with Bishop Stephen Cottrell. Since October 2010 he has been the Bishop of Chelmsford. At Easter he is due to leave this role to move on to becoming the Archbishop of York. We began by talking about the situation that the world is in at the moment due to the spread of Covid-19. He explained that whilst church buildings had their doors closed and no services were taking place in them, we should remember that the church is not the building, it is the people. In response to an article in the press today, he stated that if all the church buildings being closed saved one life, it was worth them being shut. The churches were discovering new and exciting ways of spreading the Good News of Jesus, as well as supporting members of existing congregations. People were discovering what it really meant to be the church.

We talked about his nearly ten years as Bishop of Chelmsford. He said how much he had enjoyed this time. He highlighted all the confirmation services where he had confirmed such a diverse group of people.  He had enjoyed visiting schools and doing this was always such an uplifting activity. He did not hide from the challenge presented by the retirement of many clergy, noting the great increase in the numbers of people being called by God into many different ministries. He also mentioned the financial challenges for the church. 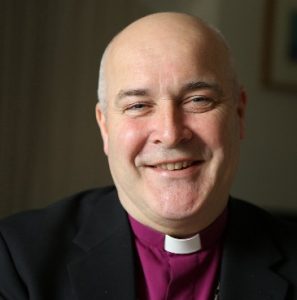 His selection to become the next Archbishop of York had been a surprise, expecting to eventually retire from Chelmsford. He was not sure what was fully expected of him in the new role, other than to continue being Stephen, doing what he does now, emphasising the need for people to  hear about Jesus. He said this was like having invitations to give a way to the best party. He said his new role would include a higher profile and give him more opportunities. Despite his commitments in the House of Lords, and the international dimension of the position, he wanted also to continue to have a role in the community where he will be living just outside York, and already had a date in his diary to go into the local school, though of course this visit had now been cancelled.

He emphasised how much he had enjoyed his time in Chelmsford and would be sad to leave. It was particularly sad that many special events and service where he would have the opportunity to say goodbye would no longer be able to happen. He was in a position of uncertainty about how everything would develop personally in the next few months. He was also looking forward with anticipation to the future. Everyone in the world was in the same  position of uncertainty. It was the role of the church to help people through this time, with the knowledge of the love of God for them and that we could all have a brighter future.