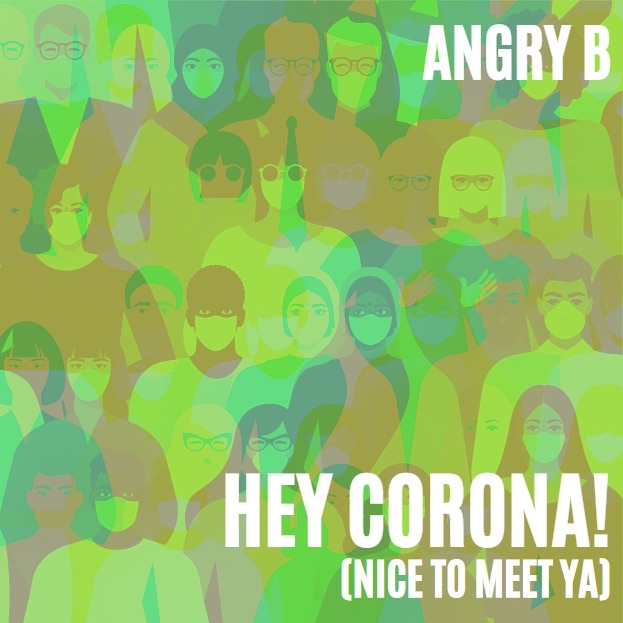 We’ve been giving Angry B’s new single Hey Corona! (Nice To Meet Ya) some rotation here on Phoenix FM, and we chatted to him about his life in music and inspirations.

Angry B is not a band at a conventional point of view. It’s a project. It combines several music styles and it doesn’t want to just being pressed in one niche.

Angry B is the essence of the best music styles combined together – whenever it seems to be strange sometimes. It started with a combination of Rap, Reggae and Blues – it goes over House music and perhaps it will even ends with some Heavy Metal tunes.

It is a project to bring the whole world of music and listeners together. Sometimes it will work – sometimes it was just a nice try. But under the line, there will be many catchy songs being produced under this exotic band name with several great artists around the world.

The band leader is based in Switzerland and has just one vision: To change the way we are listening to music styles. There are so many great artists around the world – let’s squeeze out the best of everything, concentrate this essence and create something new out of it. Whenever it’s just something tiny…

About me personally – I‘m 42 yrs old, father of 3 girls, travel connoisseur and IT guy. So my regular life has nothing to do with music. That’s why I was getting back to this beautiful world. I‘m kind of an enabler with ideas with a talent to organize people. I can‘t sing myself – nobody wants to hear my voice when I‘m singing – but as a pro speaker for IT conferences, I‘m doing not the worst job 😉

Angry B is my nickname, because I love to fly (B stands for a bird). I‘m usually not angry at all – just if I can‘t fly, as currently 😉

In my early ages I just listened to classical music and I started DJing when I was 16. After producing the first songs, I stopped all my musical activity.

I started again 20 years later when I was in my 40s. I recorded the album “From Wolf with Love” with two amazing talents in Kingston, Jamaica.

After another creative break, it was time now to release a new single. It was a very spontaneous idea and the song was born within 48 hours only.

It‘s a fusion of different styles. The new song still includes some retro elements and funky guitars. I love to play around with beforehand not matching styles.

Under the name CRF (Resignation and Nixx) we recorded the first 2 songs around 22 yrs ago.

2 yrs ago we released the album “From Wolf with Love”. Now it‘s time for the current single “Hey Corona! (Nice to Meet Ya)”.

It’s clearly a very topical subject – tell us about the song?

Angry B’s newest single about the actual happening with the Corona pandemic. A critical, but funny song about the reaction of the human beings, which leaves one question: Who is more destructive – the virus or the humans themselves …

Whenever my newest song is kind of dark, I don’t want to play down the current situation. It’s one of the most critical situations we had in the past and there will be a lot of sad stories connected with it. On the other hand, people are freaking out and making this virus way more dangerous, as it is itself.

The song should motivate the people to calm down, bring back some joy and normality in a time without the well-known structures. Further it doesn’t help to freak out and to go to buy and store toilet paper for the next 20 years. We need to get through this situation together – and if we need to stay at home for longer times (which is not the worst idea right now), there is still some room for one or more laughter. To laugh, to play music, to sing or just to be in another universe for just a few moments is one of the best medicine available right now – and you can even do it just for yourself – alone.

This is why the current song was born. It’s against hysteria and for entertainment. I don’t like to joke about the sad things connected to the virus itself – just about human stupidity in dealing with this virus.

Frustration doesn’t help us right now. We need to make the best about the current situation. Stay calm, don‘t give up, don‘t be sad and please: Leave some toilet paper available for me 😉

Which artists/genres do you enjoy listening to at the moment – and do they influence your work?

The choice is too big to mention all of them 😉

You can see more at http://hey-corona.com/ which also has a link to the YouTube video for the song: