A racist bed advert and the Essex link with Dracula


We reported today on the advert for a bed which has been deemed racist! 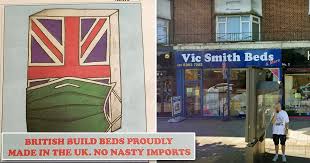 Vic Smith Beds of Southgate recently ran an ad in the Enfield and Haringey Independent Newspaper which featured the image of an upright mattress wearing a face mask and a union flag  alongside the text, ”British Build Beds Proudly Made In The UK. No Nasty Imports.”

A complaint raised by two readers (note that, just 2 readers!) that the ad was likely to cause “serious and widespread offence”, by linking concerns about the COVID-19 outbreak to nationality and race, was upheld by the Advertising Standards Authority.

Vic Smith Beds said that no issues had been raised by any members of its multi-cultural workforce and that the ad was referring to the mould spores than can develop when products are imported, and the chemical smells that can result from damp rolled mattresses.

However the watchdog noted that the reference to “British build” coupled with the image of the Union Flag, clearly showed the advertiser’s intention was to draw attention to the fact that its beds were made in the UK, and that the phrase ‘No Nasty Imports’, in combination with the image of the surgical mask, was likely to be taken as a reference to the coronavirus outbreak that could be read as a negative reference to immigration or race, in particular associating immigrants with disease.

Being a Tuesday I was joined once again by Margaret Mills who reported on the Essex connection with Dracula.

It seems that the link is actually in Purfleet, notably with a long since demolished building.

Hopefully I’ll be seeing you again next week,
Scott