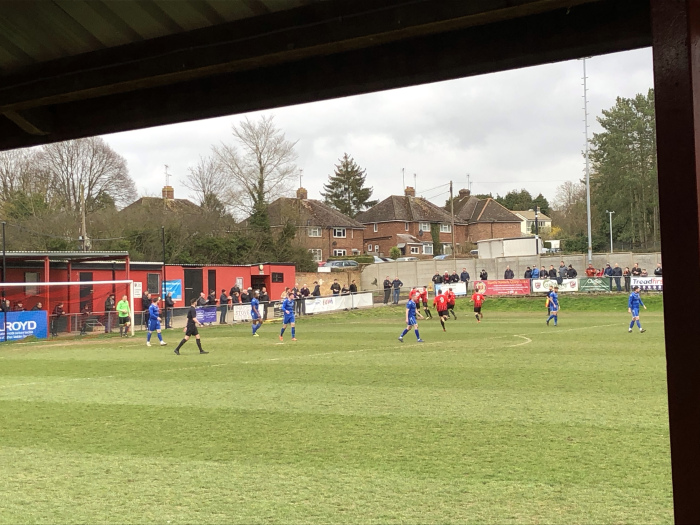 West Essex may have had a big win in midweek, but they had to take a taste of their own medicine after Hadley slammed home seven without reply at Brickfield Lane. Manny Hammond and Yemi Buraimoh both notched towards the end of the first half, but the Bricks then unleashed some firepower in the second half that ended in a rout. Sam Edwards started the spree in the 62nd minute, adding a further goal a mere minute later. Hammond then added his second of the afternoon in the 65th minute, meaning that the Bricks scored three goals in an illustrious three minute spell. Cameron Ferguson went on to score a brace himself to round up the scoring that leaves in 4th, while West Essex end the day down in 10th.

Walthamstow have blown the ESL title race wide open after they won their top of the table clash at Catons Lane. Stow were handed an 11th minute lead by Connor Scully. However the hosts levelled early in the second half. Tommy Fletcher then scored for Stow ten minutes from time and despite late Saffron pressure, the visitors held on to capture all the points that now moves them up to 2nd. They are now three points behind Saffron Walden, but have games in hand. The title wasn’t won here but the result may have some bearing on where it ends up. Walthamstow meanwhile go into another Title six-pointer on Tuesday when they visit 3rd-placed Hashtag United.

Goals from Taylor Tombides and Hassan Nalbant saw the Motormen claim all three points at bottom placed Sawbridgeworth Town. The win sees Reedbridge remain in 8th, while the Robins remain stuck down in 19th.

Heroic defending in the second half by Enfield not only earned them a point but also saw Alex Jennings and his defence claim a clean sheet. Stansted’s Jarvis Monk also kept a clean sheet but the Airportmen were unable to convert their first half chances, and as a result meant they had to be content with a goalless draw that keeps them in 5th position. Enfield remain 18th.

It was a point apiece at Mile End Stadium after the game ended in a 1-1 draw. Hamlets could really do with a win as there lowly status in the table doesn’t actually reflect how tough a team they can be at times. They looked like they were on their way when Suaibo Balde handed them the lead just past the hour. Hamlets were pegged back though as Jeffrey Cobblah grabbed Ilford an equaliser in the 87th minute and with it a share of the spoils. Tower Hamlets remain 17th after this, while Ilford now sit 13th in the table.