PREVIEW: Billericay In search of Vital Win at Eastbourne


After a trip to Weymouth, Billericay head to the Coast once more this weekend to take on Eastbourne Borough. With the Blues situated in a perilous 19th position in the National South standings, only a single point above the relegation places, a win is vital to move up the table. 18th placed Borough find themselves just one point better off in a similarly delicate situation.

With one win in the past twelve League games, and a number of home fixtures postponed, the Essex side have slipped steadily down the table in recent months. Form of late has been dominated by draws with the latest achieved on Tuesday night (1-1) versus Oxford City at a muddy New Lodge. Eastbourne are no strangers to a drawn match this year and this could well prove to be a game for the pools coupon if anybody still remembers those.

With five draws now accumulated in the past six matches, an all-important win has been elusive for Jamie O’Hara’s men. A glut of goals conceded has seen winning positions conceded although a re-modelled defence has hinted at better times ahead.

A goalless draw achieved at high-flying Weymouth last weekend was the first clean sheet achieved in the League since the visit to Dulwich Hamlet in mid-November of last year.

Eastbourne too have found victories hard to come by, with a record of two wins in their last dozen matches. The last tally of maximum points came at Priory Lane versus Dorking on New Year’s Day. An unbeaten record since Boxing Day was only spoiled by a 2-1 reverse at Dartford last time out.

The run has featured six successive draws, including valuable away points against the likes of Slough, Chelmsford, and Weymouth. The Sports, who play on a 3G surface, have a good record of avoiding defeat at home with the last reverse stretching back to a narrow loss to Bath City in late December.

There have been notable changes at Eastbourne since the sides met in early August for the first game of the season. It was a match (1-0) settled by a close-range Jake Robinson finish in the contest’s dying seconds. Having encountered financial difficulties after a backer failed to provide anticipated support at the start of the season, the South Coast side found themselves with a £40,000 budget shortfall.

An early FA Cup exit, and a lack of home games last October, brought the situation to a head, resulting in the immediate departure as manager of Lee Bradbury. Only in situ since May 2019, the ex-Havant & Waterlooville boss had signed a contract of two years with the club. 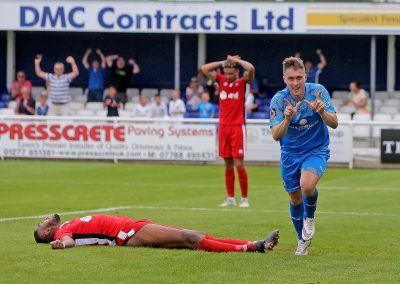 A new managerial team were named at the start of November, with Danny Bloor chosen initially as an interim manager. His role was subsequently confirmed as permanent last week. He benefits from extensive experience of the club as a former assistant manager to Jamie Howes and Mark McGhee.

Bloor will work alongside, Scott Chalmers-Stevens, the existing goalkeeping coach but now given a broader coaching role. Popular Argentinean midfielder, Sergio Torres, 37 years old, is also given the opportunity to prepare for his next career steps as part of the team in a player coach role. 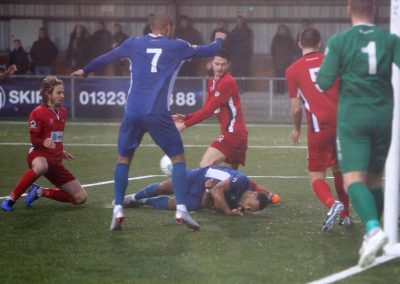 Sergio Torres looks on after an accidental collision with Billericay’s Adam Coombes at Priory Lane in December 2018. Photo Courtesy: @nickyhayesphoto

Noting financial restrictions, Eastbourne have had to cede important players. An instant consequence was the loss of Bradbury’s first summer signing, striker Elliott Romain, contributor of five League goals. A proven scorer at National South level, he was snapped up by Dartford.

By the turn of the year, ex-Billericay left-winger Nicky Wheeler had moved on to Dorking Wanderers and commanding 6ft 5ins centre-back, Manny Adebowale, had followed Bradbury to Crawley Town. Right wing-back, Kristian Campbell also departed in January 2020 due to non-financial issues.

With a different man in charge, a new tactical approach has been adopted with a prosaic 4-4-1-1 or 4-2-3-1 tending to be employed by Bloor rather than the more expansive 3-5-2 wing-back formation favoured by Bradbury. With a small squad, on a tight budget, Bloor has nonetheless managed his resources satisfactorily although he has failed to better the League position of 15th that he inherited. With an average of just over one goal scored per match, the return is thin on the attacking front.

Top scorer, Luer, is on a good run of form, with three strikes in his last four League matches. On nine League goals for the season, he is two-footed, adept at operating from the right side, and has the pace and quality to run in behind and finish. His time in the Premier League marred by injury, he arrived from Woking in the summer of 2019.

Walker, at the club since June 2018, cuts a bustling figure up front. Often left to forage on his own, he has netted six times, including a last-minute equaliser at Weymouth in early February. Wills, at the club since summer 2017, has willingly adapted to contrasting roles either operating as a defensive screen or, further forward, in an attacking role.

The Sports have been adept at giving youngsters their chance and academy product, Steven James, has recently stepped into the centre-back position alongside the experienced, Ian Gayle. Operating with distinction, in the absence of the injured Kiran Kindha-John, an impressive showing in a Sussex Senior Cup match in December earned him contention for the first X1.

Joining in November 2019, central midfielder, Jethro Hanson, released by Millwall last summer has slotted in well. In an attacking role on the left, 19 years old Woking loanee, Jack Skinner, has impressed with his energy.

Billericay have shuffled the pack of late in a bid to improve the defensive record. Ex-Dulwich, and briefly Bromley, centre-back, Michael Chambers, at 6 ft 5 ins, adds stature to the backline. Making his debut at Weymouth, he turned in a Man of the Match performance and was instrumental in achieving a rare clean sheet for the Blues. 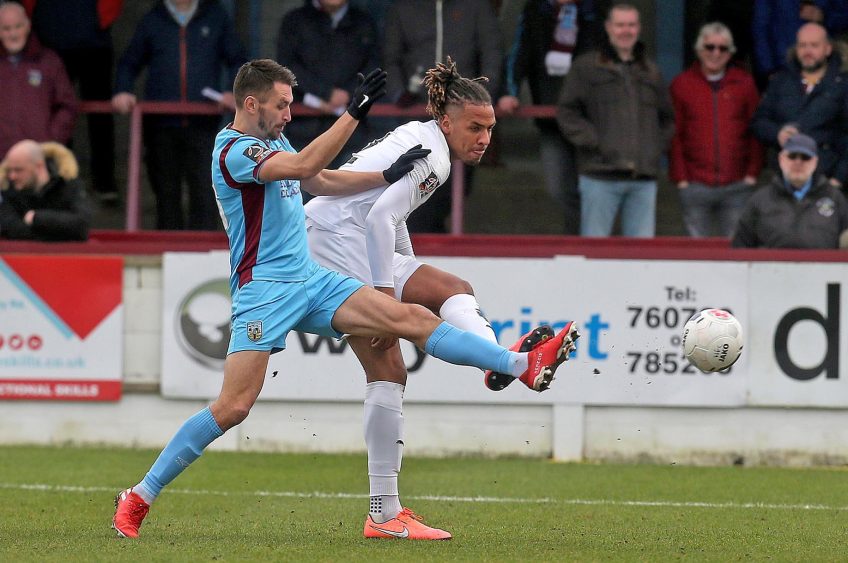 The return of Dejon Noel-Williams from injury provides the much-needed target man, and added aerial threat, that the club had lacked and, with the right service, should form a potent partnership alongside the likes of Femi Akinwande and Jake Robinson.

Both defender/midfielder Oran Jackson and right back Dinesh Gilella impressed whilst making full debuts as starters for Billericay in mid-week and are in contention for Saturday. Ade Cole, recent signing from Braintree Town, missed out on a start due to a knock at Weymouth but may be risked in midfield.

In the event that Doug Loft has not recovered from the injury incurred at Weymouth, O’Hara could also look to defensive midfielder, Jacob Cook and currently has good alternative options. The other main debate on selection is whether to go with two or three forward players, with Robinson potentially at risk.

Eastbourne have regular goalkeeper, Tom Hadler, available for selection after a six month spell out with a knee injury. Otherwise, his replacement, Argentinean, Franco Ravizzoli, will continue to deputise. QPR U-23 loanee  left-back, Franklin Domi, will likely play his third match for the Sports.

Centre-back, Kinda-John should be fit and could come in for Steven James. Both play-maker, Mike West and striker, Stephane Bombelenga, featured on Wednesday evening in the Sussex Senior Cup semi-final win after extra-time and penalties against Peacehaven and should be available. We believe that the main fitness doubt is around Walker, who was not in the squad last week-end at Dartford. 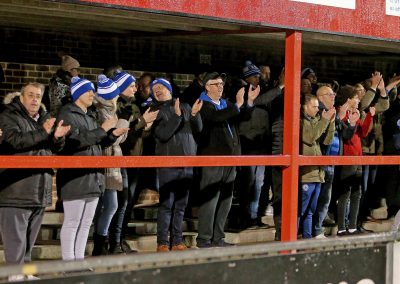 Billericay Town fans at Priory Lane to enjoy a 2-0 away win under Dean Brennan in November 2018. Photo Courtesy: @nickyhayesphoto

Ifg you wish to follow the Blues in the latest quest for points, Billericay Town Supporters Society Travel (@btss_awaytravel) will be running away day coach travel to the game. This is available at a cost of £20 for adults and £10 for accompanied U-16’s. Coaches will depart New Lodge at 11.45am promptly and return immediately after the final whistle.

Full live match commentary is also available via the club radio station @btfcliveradio , from 2:45 onwards. This can be accessed for free via the btfc club app downloadable via Apple or Google stores.