Billericay brought back a well-earned point from their long trip to Dorset, holding high-flying Weymouth to a goalless draw at the Bob Lucas Stadium. Neither team displayed their best football but the visitors can console themselves with a rare clean sheet for a new-look defence.

In an archetypal match of two halves, the Terras were clearly ahead on points in the first period. Unlike Tyson Fury’s world title bid the same evening, a knock-out blow was not forthcoming despite a gilt-edged chance for Abdulai Baggie. After the break, the Blues came to life with Femi Akinwande and Alfie Potter letting loose shots but could not force an opening.

It may be the longest trip of the season for the Essex faithful but many could not resist the lure of the Dorset coast combining the match with a week-end away. A stadium, worthy of a higher level of football, pristine pitch despite inclement weather, and welcoming hosts made the journey all the more rewarding. With the seaside town once the favourite summer haunt of King George III back in the late eighteenth century, there is every possibility it could be similarly popular with Blues fans. 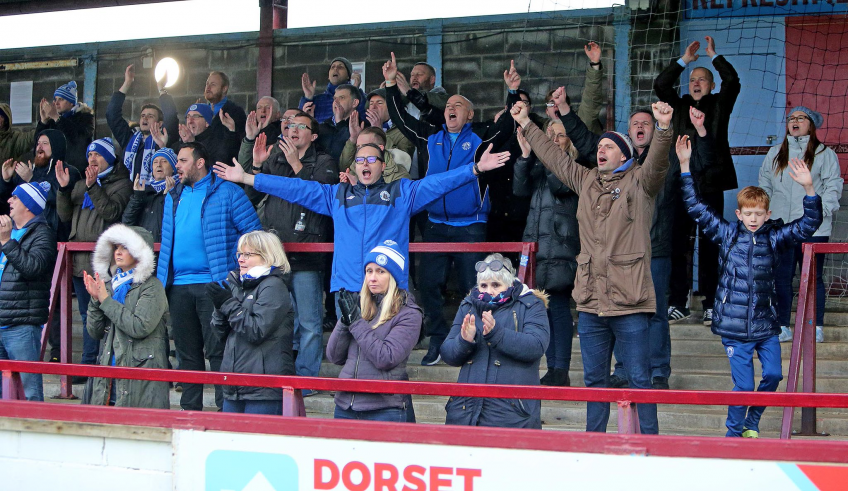 Subsequent to a poor display at Wealdstone, Billericay manager Jamie O’Hara made personnel and tactical changes. The diamond formation was forsaken and replaced with a wing-back system. Four team changes included League debuts for centre-back, Michael Chambers, and defensive midfielder, Ade Cole. Jacob Cook earnt a start in central midfield and, after injury, centre-forward Dejon Noel-Williams returned to the side at the expense of Jake Robinson. Themis Kefalas dropped to the bench.

Weymouth boss, Mark Molesley, has had to draw on resources in recent months. Since the turn of the year, a long list of first-team casualties, including centre-back Brennan Camp, midfielder Cameron Murray, striker Andy Robinson, and utility player, Jordan Ngalo, has had to be negotiated. Sitting in fifth, every indication is that the Bournemouth U-23 assistant-manager is finding the right blend with players available. Just the one change was made for the visit of Billericay with experienced campaigner Josh McQuoid into midfield to replace veteran striker, Yemi Odubade.

The Terras started strongly against a Billericay side that initially needed to find its feet after the rigours of a long coach trip. An early break from Weymouth’s Ben Thomson, cutting in from the right side, was ended by a defensive intervention from Chambers who showed no signs of travel fatigue. Brought into the Essex fold, in a bid to sharpen up a leaky defence, he cut an imposing presence and added another layer of leadership alongside the authoritative Ronnie Henry. 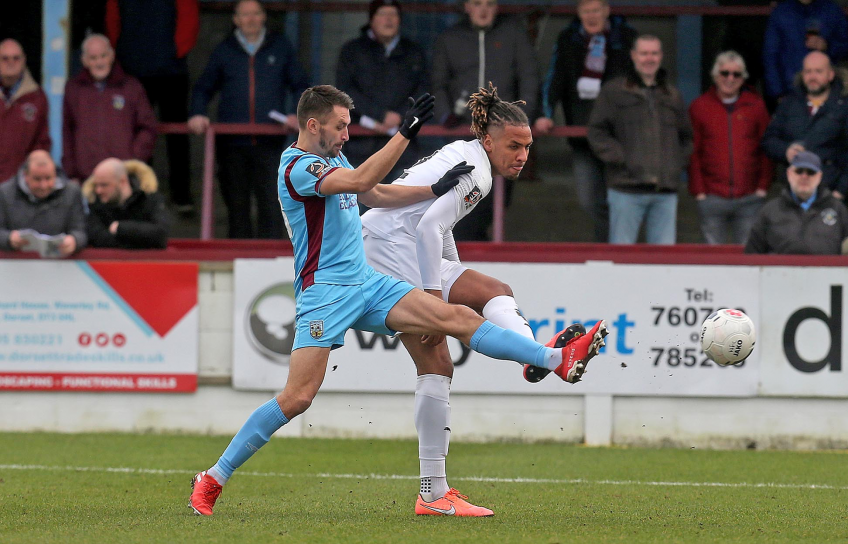 That Weymouth did not take the lead on seven minutes remains something of a mystery. Home skipper, Jake McCarthy, so effective in his long-range shooting, picked up a pass from Ollie Harfield and instantly hit a dipping 30-yard pile-driver on goal. Spilt by Blues goalkeeper, Alan Julian, Baggie fired the rebound wide from six yards. Billericay fans, who never stopped singing throughout, could be excused a moment of silence as they collectively paused for breath to contemplate the let-off.

Unperturbed, the home side poured forward with the right flank particularly strong. This combined the speed and drive of right-back Calvin Brooks with the pace and guile of Baggie. Brooks only recently returned to the side after being laid low, since early December, with a troublesome ankle injury. A timely double strike last time out to see off Hampton & Richmond had served as a reminder of his offensive capacity. The man of the moment, Baggie, Vanarama Player of the Month in January, did not reach those heights in this match but was still a source of danger.

With Weymouth more fluent, and responsible for the majority of the attacking play, Billericay’s front two of Akinwande and Noel-Williams toiled gamely but had very little to work with. On nineteen minutes, the two did link up well to fashion an opening as good work from Akinwande gave his strike partner a sight of goal. Latching onto a through pass, Noel-Williams cleverly used his body to hold off the covering defender but did not profit from the space he created as his shot sailed over the bar.

Whilst Weymouth fans may rue injuries incurred, it has created opportunities and creative midfielder, Tom Whelan, signed on loan from Yeovil was influential. On 28 minutes, he threaded a ball inside Billericay left wing-back, Harry Hudson, for Baggie to chase. Blues centre-back for the afternoon, Doug Loft, had the unenviable task of running back to his own goal to shut-down the tricky Sierra Leone international’s latest incursion. He was successful in averting danger but over-stretched making the block and was subsequently substituted for Kefalas on thirty-six minutes.

Billericay’s Chambers had looked very safe and contributed several commanding headers to defend corners. A fast break from the Terras, which set Brett Williams away, nonetheless caught him out. Bringing the striker down, Chambers merited the inevitable booking that followed. A free kick in a dangerous position was once more slammed into the defensive wall by McCarthy who failed to find his range. Home pressure had yielded three promising set-pieces, all of which failed to involve Julian.

The Billericay goalkeeper was heavily involved in the next passage of play on 42 minutes as penalty area pinball ensued. First a McQuoid shot was charged down, McCarthy’s follow up strike was then blocked by the legs of a diving Julian. Luckily for the visitors, the Terras could not finish as a wayward strike from Williams brought respite. Whilst the Blues were never dominated, midfield was not functioning at all and the best chances of the half were being carved out by the Weymouth side.

The half closed with a rarity as Billericay fashioned a chance. Potter dashed forward to serve Cole on the right side of the penalty area. The new recruit, formerly of Braintree Town, was well-placed but executed poorly, skewing an effort too high. It had been slim pickings for the visitors. The home side were the better side at the break accounting for most threats on goal.

Akinwande brought the promise of better things to come for the Blues with an admittedly hurried 25 yards effort that sped wide on fifty-two minutes. Perhaps the turning point of the match for the Blues came with the substitution four minutes later of Ade Cole for Dinesh Gilella, which led to a change in role for Potter. Shifted inside to central midfield, where he could increase his influence on the match, he looked far more comfortable in his new role than as a makeshift right wing-back.

Akinwande went close on the hour as Noel-Williams supplied him via a neat header from a cross. Back to goal, and six yards out, the Billericay striker span quickly to send a fierce shot that was saved on the line by Ward. Weymouth responded by regularly feeding the ball to Baggie on the right side. A fine recovery tackle from Potter back on defensive duties, after Baggie had sought to profit from a poor Gilella pass, ensured the home side were held at bay. 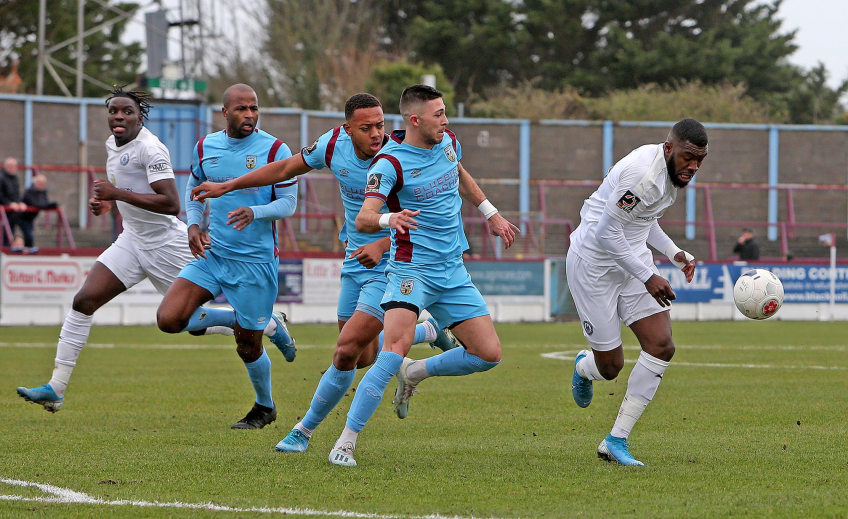 Femi Akinwande on the attack for Billericay pursued by the Weymouth defence. Photo Courtesy @nickyhayesphoto

Potter, thriving in midfield, charged forward to chase an incisive Paxman pass but could only fire wide from a tight angle. With Billericay in the driving seat for much of the second half, Robinson came on for the final quarter of an hour in a bid to seal a late winner. Weymouth had a similar idea sending on Odubade who had made the difference with a late goal at Braintree early in the month.

Paxman showed a flash of class with a frustrating finish to match. Dropping his shoulder on the edge of the area to cut splendidly past centre-back, Stephane Zubar, he fired an eighty-first minute drive at the advanced Calum Ward who fielded with ease. Four minutes later, Odubade had his opportunity but shot straight at Julian. Six minutes of added time ticked down without incident. 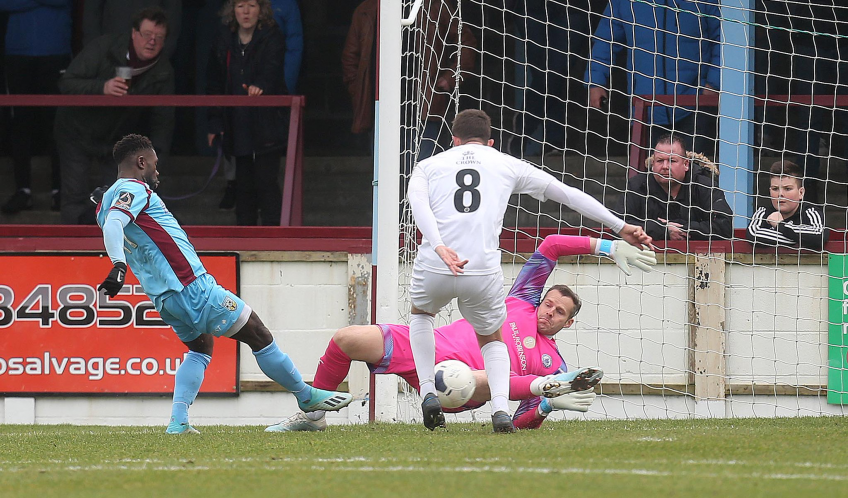 This result has much more significance for Billericay than simply providing another point towards safety. It proves the Blues can travel to difficult places against top sides and keep clean sheets. A huge confidence booster, it provides comfort that good results at home can be combined with success on the road. After a torrent of goals both scored and conceded, the ability to achieve a result in a tight match could be the difference between a nervy relegation fight and mid-table security.